Most marine coccoid and sarcinoid green algal species have traditionally been placed within genera dominated by species from freshwater or soil habitats. For example, the genera Chlorocystis and Halochlorococcum contain exclusively marine species; however, their familial and ordinal affinities are unclear. They are characterized by a vegetative cell with lobated or reticulated chloroplast, formation of quadriflagellated zoospores and living epi- or endophytically within benthic macroalgae. They were integrated into the family Chlorochytriaceae which embraces all coccoid green algae with epi- or endophytic life phases. Later, they were excluded from the family of Chlorococcales based on studies of their life histories in culture, and transferred to their newly described order, Chlorocystidales of the Ulvophyceae. Both genera form a “Codiolum”-stage that serves as the unicellular sporophyte in their life cycles. Phylogenetic analyses of SSU and ITS rDNA sequences confirmed that these coccoid taxa belong to the Chlorocystidales, together with the sarcinoid genus Desmochloris. The biflagellated coccoid strains were members of the genus Sykidion, which represented its own order, Sykidiales, among the Ulvophyceae. Considering these results and the usage of the ITS-2/CBC approach revealed three species of Desmochloris, six of Chlorocystis, and three of Sykidion. Three new species and several new combinations were proposed. View Full-Text
Keywords: Desmochloris; Chlorocystis; Halochlorococcum; Pseudoneochloris; Sykidion; molecular phylogeny; small subunit rRNA (SSU); internal transcribed spacer (ITS) Desmochloris; Chlorocystis; Halochlorococcum; Pseudoneochloris; Sykidion; molecular phylogeny; small subunit rRNA (SSU); internal transcribed spacer (ITS)
►▼ Show Figures 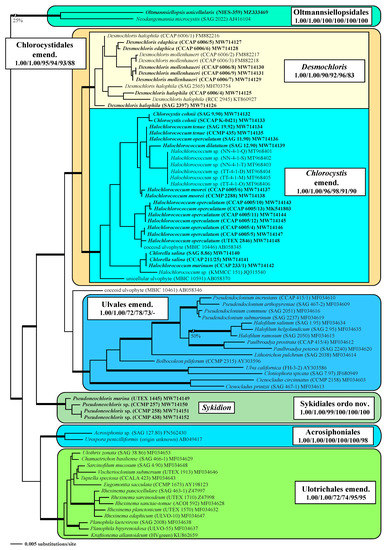