TonB-Dependent Transporters in Sphingomonads: Unraveling Their Distribution and Function in Environmental Adaptation
Previous Article in Journal

Degradation Potential of the Nonylphenol Monooxygenase of Sphingomonas sp. NP5 for Bisphenols and Their Structural Analogs

An effective bioaugmentation system for oil-contaminated soil under low-temperature conditions was developed with a rotational slurry bioreactor. Mixtures of two Rhodococcus oil-degraders, strain A and C, which are officially permitted to be used in bioaugmentation in Japan, were inoculated and A-fuel oil was added to a final concentration of 2500 and 5000 mg/kg-slurry. Decomposition tests were carried out for the inoculated samples and non-inoculated samples by rotating at 15 °C, the annual average temperature of Japan. The residue of A-fuel oil and the number of bacteria were measured every two days. After 6 days of treatment, more than 95% of the oil was removed in the inoculated samples, which was more than three times faster than a previous degradation experiment without rotation. A semi-continuous treatment was performed by removing 90% of the treated slurry, then adding the same amount of contaminated slurry into the system without additional degraders. Ninety-four percent of A-fuel oil was successfully degraded after 6 days by this repeated treatment. This could drastically reduce the cost of preparing the degraders. Strikingly, semi-continuous treatment showed oil removal in the non-inoculated samples, indicating that the rotational slurry conditions could efficiently promote biodegradation by indigenous degraders. Our rotational slurry bioreactor accelerated the removal of oil contamination without adding further degraders provides an efficient and cost-effective method of removal of A-fuel oil using a semi-continuous system, which can be used in practical applications in areas with a cooler climate. View Full-Text
Keywords: A-fuel oil; Rhodococcus; bioaugmentation; rotational slurry bioreactor A-fuel oil; Rhodococcus; bioaugmentation; rotational slurry bioreactor
►▼ Show Figures 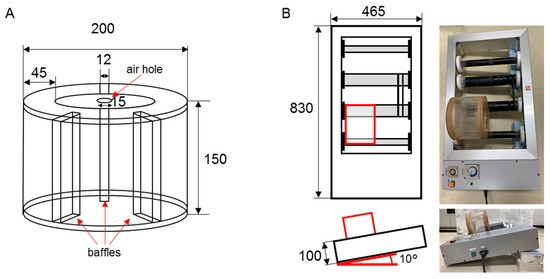