Mechanisms Affecting the Acquisition, Persistence and Transmission of Francisella tularensis in Ticks

Genetic Traces of the Francisella tularensis Colonization of Spain, 1998–2020

More than 1000 humans have acquired the febrile disease tularemia in Spain since the first notification of human cases in 1997. We here aimed to study the recent molecular evolution of the causative bacterium Francisella tularensis during disease establishment in Spain. Single-nucleotide polymorphisms (SNPs) and variable-number tandem repeats (VNTRs) were analyzed in whole-genome sequences (WGS) of F. tularensis. Short-read WGS data for 20 F. tularensis strains from humans infected in the periods 2014–2015 and 2018–2020 in Spain were generated. These data were combined with WGS data of 25 Spanish strains from 1998 to 2008 and two reference strains. Capillary electrophoresis data of VNTR genetic regions were generated and compared with the WGS data for the 11 strains from 2014 to 2015. Evolutionary relationships among strains were analyzed by phylogenetic methods. We identified 117 informative SNPs in a 1,577,289-nucleotide WGS alignment of 47 F. tularensis genomes. Forty-five strains from Spain formed a star-like SNP phylogeny with six branches emerging from a basal common node. The most recently evolved genomes formed four additional star-like structures that were derived from four branches of the basal common node. VNTR copy number variation was detected in two out of 10 VNTR regions examined. Genetic clustering of strains by VNTRs agreed with the clustering by SNPs. The SNP data provided higher resolution among strains than the VNTRs data in all but one cases. There was an excellent correlation between VNTR marker sizing by capillary electrophoresis and prediction from WGS data. The genetic data strongly support that tularemia, indeed, emerged recently in Spain. Distinct genetic patterns of local F. tularensis population expansions imply that the pathogen has colonized a previously disease-free geographical area. We also found that genome-wide SNPs provide higher genetic resolution among F. tularensis genomes than the use of VNTRs, and that VNTR copy numbers can be accurately predicted using short-read WGS data. View Full-Text
Keywords: Spain; tularemia; Francisella; SNP; VNTR; NGS; sequencing; colonization; evolution; epidemiology Spain; tularemia; Francisella; SNP; VNTR; NGS; sequencing; colonization; evolution; epidemiology
►▼ Show Figures 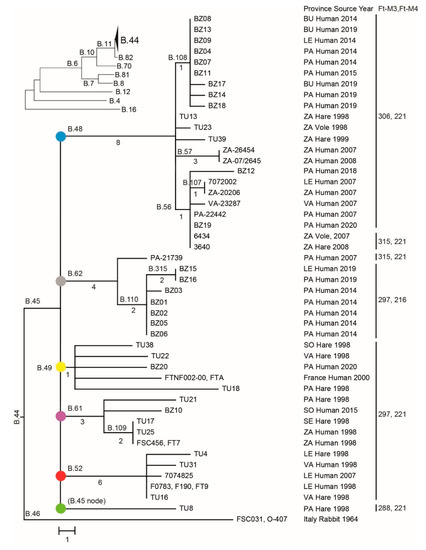