Microbial communities play a key role for central biogeochemical cycles in the subsurface. Little is known about whether short-term seasonal drought and rewetting events influence the dominant microbes involved in C- and N-cycles. Here, we applied metaproteomics at different subsurface sites in winter, summer and autumn from surface litter layer, seepage water at increasing subsoil depths and remote located groundwater from two wells within the Hainich Critical Zone Exploratory, Germany. We observed changes in the dominance of microbial families at subsurface sampling sites with increasing distances, i.e., Microcoleaceae dominated in topsoil seepage, while Candidatus Brocadiaceae dominated at deeper and more distant groundwater wells. Nitrifying bacteria showed a shift in dominance from drought to rewetting events from summer by Nitrosomandaceae to autumn by Candidatus Brocadiaceae. We further observed that the reductive pentose phosphate pathway was a prominent CO2-fixation strategy, dominated by Woeseiaceae in wet early winter, which decreased under drought conditions and changed to a dominance of Sphingobacteriaceae under rewetting conditions. This study shows that increasing subsurface sites and rewetting event after drought alter the dominances of key subsurface microbes. This helps to predict the consequences of annual seasonal dynamics on the nutrient cycling microbes that contribute to ecosystem functioning. View Full-Text
Keywords: metaproteomics; microbial communities; subsurface; nutrient cycles; critical zone metaproteomics; microbial communities; subsurface; nutrient cycles; critical zone
►▼ Show Figures 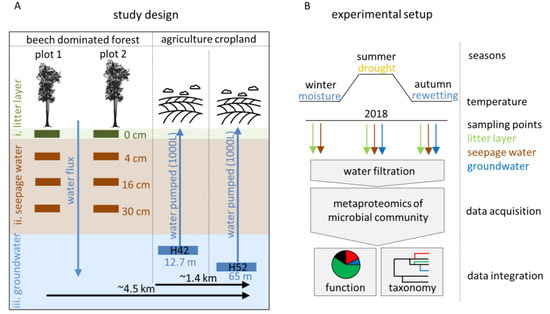