The Epstein–Barr Virus (EBV) infects the vast majority of human individuals worldwide (~90%) and is associated with several diseases, including different types of cancer and multiple sclerosis, which show wide variation in incidence among global geographical regions. Genetic variants in EBV genomic sequences have been used to determine the geographical structure of EBV isolates, but our understanding of EBV diversity remains highly incomplete. We generated sequences for 13 pivotal EBV genes derived from 103 healthy individuals, expanding current EBV diversity datasets with respect to both geographic coverage and number of isolates per region. These newly generated sequences were integrated with the more than 250 published EBV genomes, generating the most geographically comprehensive data set of EBV strains to date. We report remarkable variation in single-gene phylogenies that, when analysed together, show robust signals of population structure. Our results not only confirm known major global patterns of geographic variation, such as the clear separation of Asian isolates from the rest, and the intermixed relationships among African, European and Australian isolates, but yield novel phylogenetic relationships with previously unreported populations. We provide a better understanding of EBV’s population structure in South America, Africa and, by the inclusion of Turkey and Georgia, we also gain insight into EBV diversity in Western Asia, a crossroads connecting Europe, Africa and Asia. In summary, our results provide a detailed world-wide characterisation of EBV genetic clusters, their enrichment in specific geographic regions, novel inter-population relationships, and a catalogue of geographically informative EBV genetic variants. View Full-Text
Keywords: Esptein–Barr virus; human herpes virus 4; genetic diversity; phylogeny; phylogeography; genomics; gene Esptein–Barr virus; human herpes virus 4; genetic diversity; phylogeny; phylogeography; genomics; gene
►▼ Show Figures 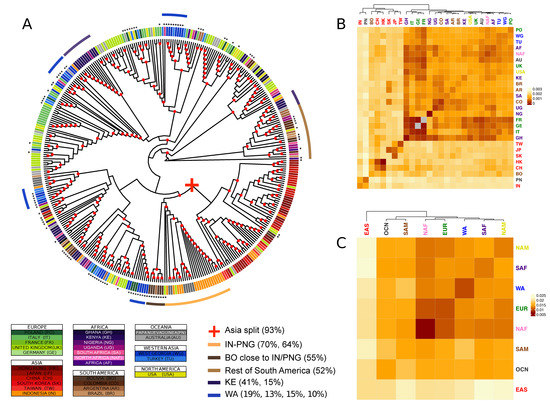