Tuberculosis (TB) vaccination could be used as a key part of integrated strategies for the disease’s control if an effective and safe vaccine under field conditions is obtained. Recent studies in Spain have evaluated the protective efficacy of two oral vaccines against experimental challenge with live intra-bronchial Mycobacterium bovis in captive badgers: the live-attenuated M. bovis BCG vaccine (Danish strain) and a heat-inactivated M. bovis (HIMB) vaccine. With the objective of increasing the knowledge of the cellular development progress of infection and generating further tools to discriminate between mild and severe TB lesions between and within animals, the immunopathology of tuberculous lesions was studied to characterize the local immune response (cell type profile) within lung granulomas from control (non-vaccinated), BCG vaccinated and HIMB-vaccinated experimentally infected badgers with M. bovis. Four immunohistochemical protocols, for the specific detection of macrophages, T lymphocytes, B lymphocytes and plasma cells within TB granulomas in formalin fixed sections of the right middle lung lobe (lobe targeted for the M. bovis delivery), were performed. Immunolabelled sections were scanned and five randomly selected areas were analyzed with digital image analysis software. The results were expressed as the proportion of the positively immunolabelled area within the total area of the selected site. Data was analyzed using the statistical analysis software (SAS). In the three treatment groups, macrophages were the most abundant inflammatory cells within the granulomas, followed by B lymphocytes and plasma cells. T lymphocyes were absent in those granulomas. This would suggest a predominance of a non-specific innate response mediated by phagocytic cells over an adaptative humoral immune response. The proportion of macrophages and plasma cells was higher in BCG and HIMB-vaccinated badgers, respectively, suggesting the establishment of an adaptative humoral response in HIMB-vaccinated badgers. The lower bacterial load at the lung level, as well as the volume of lesions in lungs using magnetic resonance imaging in badgers with the HIMB vaccine in relation with local immune response presented, must be highlighted, since it would be an advantage in favor of its use under field conditions in terms of reducing TB transmission and environmental contamination. View Full-Text
Keywords: tuberculosis; badger; BCG vaccine; Mycobacterium bovis heat-inactivated (HIMB) vaccine; immunohistochemistry; granuloma tuberculosis; badger; BCG vaccine; Mycobacterium bovis heat-inactivated (HIMB) vaccine; immunohistochemistry; granuloma
►▼ Show Figures 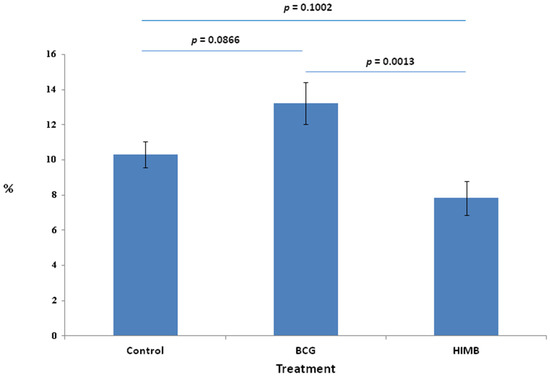