Can Ciprofloxacin be Used for Precision Treatment of Gonorrhea in Public STD Clinics? Assessment of Ciprofloxacin Susceptibility and an Opportunity for Point-of-Care Testing

Atypical, Yet Not Infrequent, Infections with Neisseria Species

Neisseria species are extremely well-adapted to their mammalian hosts and they display unique phenotypes that account for their ability to thrive within niche-specific conditions. The closely related species N. gonorrhoeae and N. meningitidis are the only two species of the genus recognized as strict human pathogens, causing the sexually transmitted disease gonorrhea and meningitis and sepsis, respectively. Gonococci colonize the mucosal epithelium of the male urethra and female endo/ectocervix, whereas meningococci colonize the mucosal epithelium of the human nasopharynx. The pathophysiological host responses to gonococcal and meningococcal infection are distinct. However, medical evidence dating back to the early 1900s demonstrates that these two species can cross-colonize anatomical niches, with patients often presenting with clinically-indistinguishable infections. The remaining Neisseria species are not commonly associated with disease and are considered as commensals within the normal microbiota of the human and animal nasopharynx. Nonetheless, clinical case reports suggest that they can behave as opportunistic pathogens. In this review, we describe the diversity of the genus Neisseria in the clinical context and raise the attention of microbiologists and clinicians for more cautious approaches in the diagnosis and treatment of the many pathologies these species may cause. View Full-Text
Keywords: Neisseria species; Neisseria meningitidis; Neisseria gonorrhoeae; commensal; pathogenesis; host adaptation Neisseria species; Neisseria meningitidis; Neisseria gonorrhoeae; commensal; pathogenesis; host adaptation
►▼ Show Figures 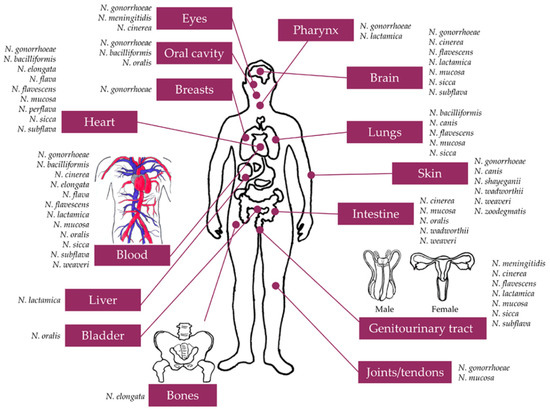