Atypical, Yet Not Infrequent, Infections with Neisseria Species
Previous Article in Journal

Members of the genus Curvularia are melanin-producing dematiaceous fungi of increasing clinical importance as causal agents of both local and invasive infections. This study contributes to the taxonomical and clinical knowledge of this genus by describing two new Curvularia species based on isolates from corneal scrapings of South Indian fungal keratitis patients. The phylogeny of the genus was updated based on three phylogenetic markers: the internal transcribed spacer (ITS) region of the ribosomal RNA gene cluster as well as fragments of the glyceraldehyde-3-phosphate dehydrogenase (gpdh) and translation elongation factor 1-α (tef1α) genes. The maximum likelihood phylogenetic tree constructed from the alignment of the three concatenated loci revealed that the examined isolates are representing two new, yet undescribed, Curvularia species. Examination of colony and microscopic morphology revealed differences between the two species as well as between the new species and their close relatives. The new species were formally described as Curvularia tamilnaduensis N. Kiss & S. Kocsubé sp. nov. and Curvularia coimbatorensis N. Kiss & S. Kocsubé sp. nov. Antifungal susceptibility testing by the broth microdilution method of CLSI (Clinical & Laboratory Standards Institute) revealed that the type strain of C. coimbatorensis is less susceptible to a series of antifungals than the C. tamilnaduensis strains. View Full-Text
Keywords: Curvularia; keratitis; taxonomy; antifungal susceptibility; Curvularia coimbatorensis; Curvularia tamilnaduensis Curvularia; keratitis; taxonomy; antifungal susceptibility; Curvularia coimbatorensis; Curvularia tamilnaduensis
►▼ Show Figures 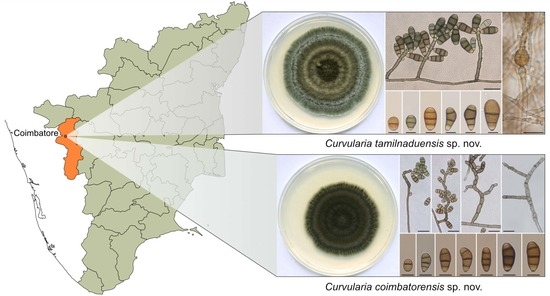