Human Herpesvirus Sequencing in the Genomic Era: The Growing Ranks of the Herpetic Legion
Next Article in Special Issue

Avian gyrovirus 2 (AGV2), which is similar to chicken infectious anemia virus, is a new member of the genus Gyrovirus. AGV2 has been detected not only in chicken but also in human tissues and feces. This study analyzed 91 samples (8 from liver tissue and 83 from fecal samples) collected from king ratsnakes (Elaphe carinata) from 7 separate farms in Hubei and Henan, China, for AGV2 DNA using PCR. The results demonstrated a low positive rate of AGV2 (6.59%, 6/91) in the snakes, and all the positive samples were collected from the same farm. The AGV2 strain HB2018S1 was sequenced, and its 2376 nt genome comprised three partially overlapping open reading frames: VP1, VP2, and VP3. Phylogenetic analysis revealed that the HB2018S1 and NX1506-1 strains from chickens in China belong to the same clade and that they have a nucleotide identity as high as 99.5%. Additionally, recombination analysis showed that HB2018S1 might originate from the recombination of viruses similar to those detected in chickens and a ferret. A total of 10 amino acid mutation sites (44(R/K), 74(T/A), 256 (C/R), 279(L/Q), and 373(V/A) in AGV2 VP1; 60(I/T), 125(T/I), 213(D/N), and 215(L/S) in AGV2 VP2; and 83(H/Y) in AGV2 VP3) different from those observed in most reference strains were found in the genome of HB2018S1, indicating that the differences may be related to a transboundary movement among hosts, which needs further elucidation. To the best of our knowledge, this study is the first report on an AGV2-infected poikilotherm, suggesting that cross-host transmission of viruses with circular single-stranded DNA genomes would be a public health concern. View Full-Text
Keywords: avian gyrovirus 2; variant-related gyrovirus; sequence analysis; phylogenetic analysis; amino acid sites avian gyrovirus 2; variant-related gyrovirus; sequence analysis; phylogenetic analysis; amino acid sites
►▼ Show Figures 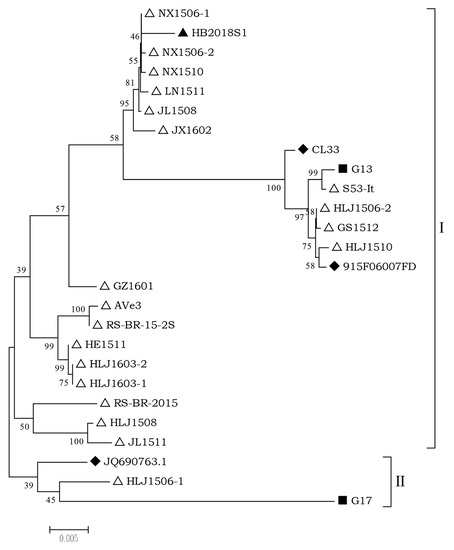