Dual Transcriptional Profile of Aspergillus flavus during Co-Culture with Listeria monocytogenes and Aflatoxin B1 Production: A Pathogen–Pathogen Interaction
Previous Article in Journal

Listeriosis is one of the most significant humans and animals foodborne infectious diseases. Here, we characterized 48 Listeria monocytogenes strains isolated in the territory of inner Eurasia during the second half of the 20th century. A total of 23 strains (52.3%) were susceptible to the nine antibiotics tested, 30.43%, 15.22%, and 8.7% were resistant penicillin G, ampicillin, and enrofloxacin, respectively. We applied the multilocus sequence typing (MLST) scheme to determine the phylogenetic positions of the strains. All but one strain belonged to the II phylogenetic lineage, and the majority of the strains belonged to one of the previously described clonal complexes (CCs). More than 60% of the strains belonged to the clonal complex CC7 that prevailed among all sources, including cattle (58%), small ruminants (64%), rodents (71%), and humans (50%). Further, CC7, CC101, and CC124 were found among human isolates. The MLST scheme was supplemented with virulence gene analysis. In total, eight inlA, six inlB, and six inlC allelic variants were found, and all but one strain carried one of the two inlE alleles. Most strains (62.5%) belonged to the same multivirulence locus sequence typing (MvLST) type, which includes CC7, inlA allele 4, inlB allele 14, inlC allele 6, and inlE allele 8. View Full-Text
Keywords: Listeria monocytogenes; listeriosis; food infections; virulence; multilocus sequence typing; clonal complex; phylogenetic lineages Listeria monocytogenes; listeriosis; food infections; virulence; multilocus sequence typing; clonal complex; phylogenetic lineages
►▼ Show Figures 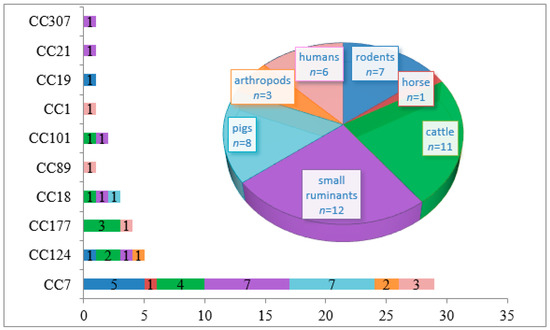