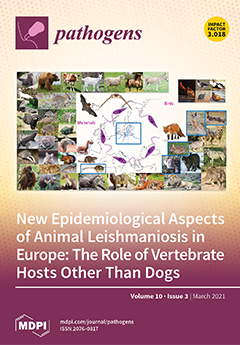 Cover Story (view full-size image): Infection with Leishmania infantum can lead to severe disease in humans and dogs, with the latter acting as a reservoir of the parasite. Based on a comprehensive search of scientific literature published from 2001 to 2020, this review provides an exhaustive list of vertebrates other than dogs and humans in which infections with or exposure to Leishmania have been detected in Europe. Most cases are from the Mediterranean region, but few species are confirmed to be infectious to vectors. Domestic animals, because of close contact with humans, pose a concern—cats in particular. Wildlife is less likely to contribute to zoonotic transmission, except for hares. This potentially large reservoir needs to be considered when developing control measures for zoonotic leishmaniosis. View this paper
Previous Issue
Volume 10, February
Next Issue
Volume 10, April
We use cookies on our website to ensure you get the best experience. Read more about our cookies here.
Accept
We have just recently launched a new version of our website. Help us to further improve by taking part in this short 5 minute survey here. here.
Never show this again