Parts and Wholes: The Role of Animals in the Performance of Dolenjska Hallstatt Funerary Rites
Previous Article in Special Issue

Yanagita Kunio and the Culture Film: Discovering Everydayness and Creating/Imagining a National Community, 1935–1945†

Jinshi Fujii
Faculty of Letters, Arts and Sciences, Waseda University, Tokyo 162-8644, Japan
†
Translated by Michael Raine, Marcos P. Centeno-Martín, and Maiko Kodaka. This article was originally published as Fujii Jinshi. 2003. Yanagita Kunio to bunka eiga: Shōwa jyūnendai niokeru nichijōseikatsu no hakken to kokumin no sōzō. In The Politics of Cinema (Eiga no seijigaku). Edited by Hase Masato and Nakamura Hideyuki. Tokyo: Seikyūsha, pp. 265–301. This translation is printed by permission of the original publisher. The author discusses the conflicted definition of “culture film” (bunka eiga) in relation to Japanese folklore studies (minzokugaku). Those fields are referred to by their English translations throughout this article. All names in the text are given in Japanese order (family name first) with the exception of the author attribution above.
Arts 2020, 9(2), 54; https://doi.org/10.3390/arts9020054
Received: 11 February 2020 / Revised: 31 March 2020 / Accepted: 2 April 2020 / Published: 26 April 2020
(This article belongs to the Special Issue Developments in Japanese Documentary Film)
View Full-Text Download PDF
Browse Figures
Cite This Paper

In wartime Japan, folklore studies (minzokugaku) as an academic discipline emerged at the same time as the rise of the culture film (bunka eiga). Both helped mobilize peripheral areas and firmly created the image of a unitary nation. This paper focuses on Living by the Earth (Tsuchi ni ikiru, 1941), directed by Miki Shigeru, and its spinoff photo album titled People of the Snow Country (Yukiguni no minzoku, 1944). Miki filmed rural life and ordinary people in the Tohoku region under the strong influence of Yanagita Kunio, a founder of Japanese folklore studies, and published the photo album in collaboration with Yanagita. In this project, vanishing customs were paradoxically regarded as objects impossible to photograph. However, that paradox enhanced the value of the project and made it easier to construct an imagined national community through the discourse of folklore studies. View Full-Text
Keywords: documentary film; the culture film; folklore studies; documentary photography documentary film; the culture film; folklore studies; documentary photography
►▼ Show Figures 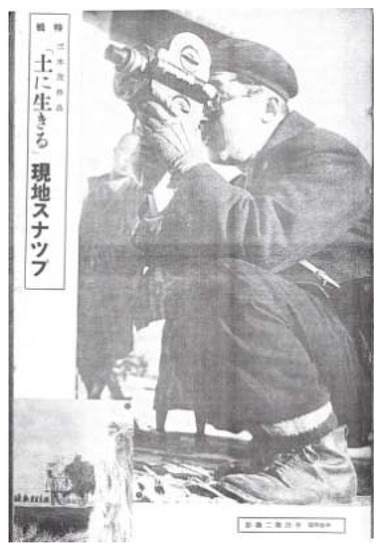