Toward the Integration of an Attract-and-Kill Approach with Entomopathogenic Nematodes to Control Multiple Life Stages of Plum Curculio (Coleoptera: Curculionidae)

Efforts to reduce insecticide inputs against plum curculio, Conotrachelus nenuphar, a key pest of apples in eastern North America, include perimeter-row insecticide sprays applied after the whole-orchard petal fall spray to manage dispersing adults and, more recently, insecticide sprays confined to odor-baited trap trees. Entomopathogenic nematodes (EPNs) are virulent to ground-dwelling stages of C. nenuphar, and may be applied to the ground underneath trap-tree canopies. Here, we (1) compared the efficacy of the odor-baited trap tree approach with grower-prescribed (=grower standard) sprays to manage C. nenuphar populations over a six-year period in seven commercial apple orchards in New England; and (2) assessed the performance of the EPN Steinernema riobrave at suppressing ground-dwelling stages of C. nenuphar. In addition, the performance of S. riobrave was compared against that of S. carpocapsae and S. feltiae in one year. Across the six years, percent fruit injury on trap tree plots averaged 11.3% on odor-baited trap trees and 1.4% on unbaited trees in grower standard plots, highlighting the ability of trap trees to aggregate C. nenuphar activity and subsequent injury. Mean percentage injury on fruit sampled from interior trees, the strongest measure of treatment performance, in trap tree plots did not differ significantly from that recorded on interior trees in grower standard spray plots (0.95 vs. 0.68%, respectively). Steinernema riobrave consistently reduced C. nenuphar populations as indicated by the significantly lower number of adult C. nenuphar that emerged from the soil, when compared to water control. Steinernema carpocapsae and S. riobrave performed similarly well, and both EPN species outperformed S. feltiae. Our combined findings indicate that an IPM approach that targets multiple life stages of C. nenuphar has the potential to manage this pest more sustainably in a reduced-spray environment. View Full-Text
Keywords: aggregation; semiochemicals; integrated pest management; biological control; behavior aggregation; semiochemicals; integrated pest management; biological control; behavior
►▼ Show Figures 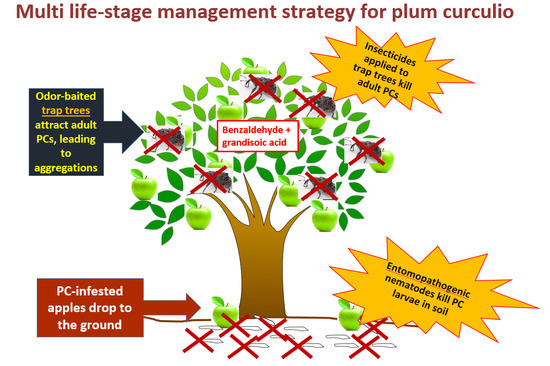