The ATP-binding cassette (ABC) transporter superfamily is one of the largest groups of proteins and plays a non-negligible role in phase III of the detoxification process, which is highly involved in the response of insects to environmental stress (plant secondary metabolites and insecticides). In the present study, in Nilaparvata lugens, we identified 32 ABC transporters, which are grouped into eight subfamilies (ABCA–H) based on phylogenetic analysis. The temporal and spatial expression profiles suggested that the nymphal stages (1st–5th) and adult males showed similarity, which was different from eggs and adult females, and NlABCA1, NlABCA2, NlABCB6, NlABCD2, NlABCG4, NlABCG12, NlABCG15, and NlABCH1 were highly expressed in the midgut and Malpighian tubules. In addition, ABCG12, which belongs to the ABC transporter G subfamily, was significantly upregulated after exposure to sulfoxaflor, nitenpyram, clothianidin, etofenprox, chlorpyrifos, and isoprocarb. Moreover, verapamil significantly increased the sensitivity of N. lugens to nitenpyram, clothianidin, etofenprox, chlorpyrifos, and isoprocarb. These results provide a basis for further research on ABC transporters involved in detoxification in N. lugens, and for a more comprehensive understanding of the response of N. lugens to environmental stress. View Full-Text
Keywords: ABC transporters; detoxification; Nilaparvata lugens; insecticides ABC transporters; detoxification; Nilaparvata lugens; insecticides
►▼ Show Figures 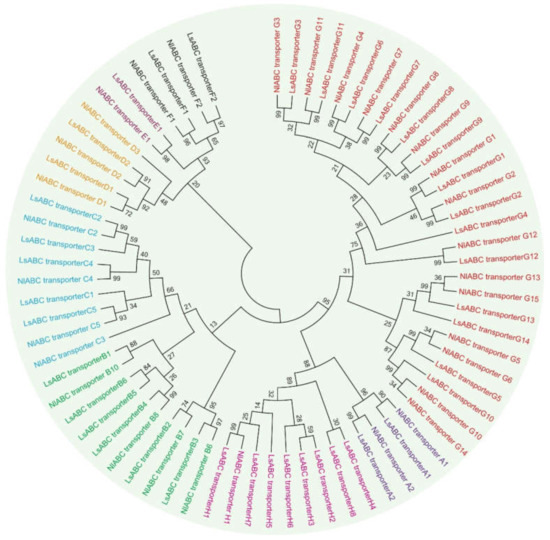