The Cytotoxic Effect of Genistein, a Soybean Isoflavone, against Cultured Tribolium Cells
Previous Article in Journal

The invasive fall armyworm (FAW) is threatening maize production and the livelihoods of millions of smallholder farmers in the newly invaded areas in Africa and Asia. To control this new key pest and to overcome health, environmental, and resistance problems related to the indiscriminate use of insecticides, effective and sustainable alternative pest control approaches are needed. Here, we report on field trials that tested maltodextrin, neem-based products, ash, and soil, as well as the locally produced alata samina soap, in the Upper West and Greater Accra regions, Ghana. Significant reductions of larval numbers and crop damage, together with increased yields, were mostly achieved by applying the insecticide emamectin benzoate, which was considered the positive control in this set of trials. However, high efficiency and cost–benefit ratios were also achieved with two neem-based products. Maltodextrin was only efficient at one of the two sites, with a clear dose-dependent effect, while the higher dosage was nearly as effective as emamectin benzoate. Due to its relatively high product cost, maltodextrin is generally less cost-efficient. Ash and soil, as well as alata samina soap treatments, did not efficiently reduce FAW larval numbers or crop damage at the dosages tested; thus, they also did not significantly increase maize yields. View Full-Text
Keywords: sustainable pest management; fall armyworm; biopesticides; maize; Ghana; field trials sustainable pest management; fall armyworm; biopesticides; maize; Ghana; field trials
►▼ Show Figures 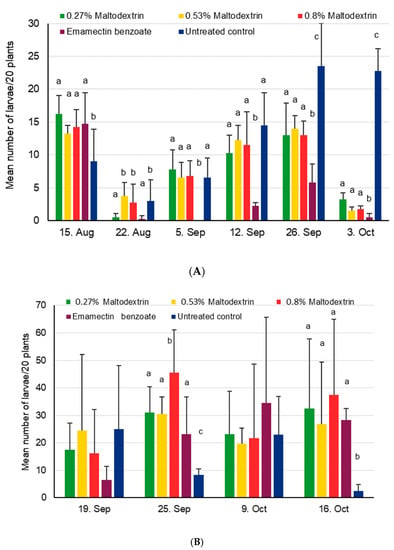