Prevalence and Clinical Characteristics of Children and Adolescents with Metabolically Healthy Obesity: Role of Insulin Sensitivity
Next Article in Special Issue

The Messy Alkaline Formose Reaction and Its Link to Metabolism

Organic Components of Small Bodies in the Outer Solar System: Some Results of the New Horizons Mission

The close encounters of the Pluto–Charon system and the Kuiper Belt object Arrokoth (formerly 2014 MU69) by NASA’s New Horizons spacecraft in 2015 and 2019, respectively, have given new perspectives on the most distant planetary bodies yet explored. These bodies are key indicators of the composition, chemistry, and dynamics of the outer regions of the Solar System’s nascent environment. Pluto and Charon reveal characteristics of the largest Kuiper Belt objects formed in the dynamically evolving solar nebula inward of ~30 AU, while the much smaller Arrokoth is a largely undisturbed relic of accretion at ~45 AU. The surfaces of Pluto and Charon are covered with volatile and refractory ices and organic components, and have been shaped by geological activity. On Pluto, N2, CO and CH4 are exchanged between the atmosphere and surface as gaseous and condensed phases on diurnal, seasonal and longer timescales, while Charon’s surface is primarily inert H2O ice with an ammoniated component and a polar region colored with a macromolecular organic deposit. Arrokoth is revealed as a fused binary body in a relatively benign space environment where it originated and has remained for the age of the Solar System. Its surface is a mix of CH3OH ice, a red-orange pigment of presumed complex organic material, and possibly other undetected components. View Full-Text
Keywords: Solar System; Pluto; Charon; Arrokoth; Kuiper Belt object; complex organics; solar nebula; protoplanetary disk; New Horizons Solar System; Pluto; Charon; Arrokoth; Kuiper Belt object; complex organics; solar nebula; protoplanetary disk; New Horizons
►▼ Show Figures 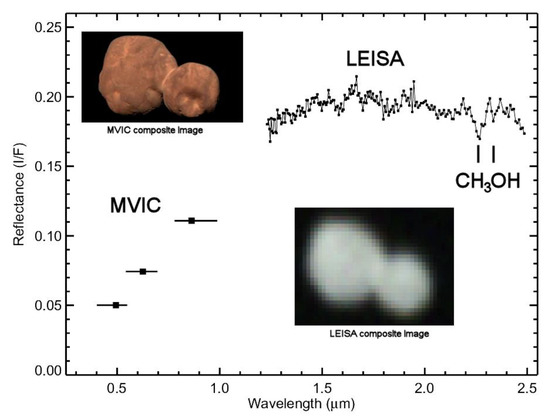