Due to the importance of the wide occurrence of thick coal seams for Chinese coal resources, the origins of these seams have received considerable attention. Using the Early Cretaceous No. 5 coal seam with a thickness of 16.8 m in Inner Mongolia as a case study, this paper presents a systematic investigation of the coal petrology, geochemistry, and palynology of 19 coal samples to explain the origin and evolution of peat accumulation. The results indicate that the No. 5 coal seam is generally characterized by low rank (lignite), dominant huminite (average = 82.3%), intermediate ash yield (average = 16.03%), and sulfur content (average = 1.12%). The proportion of spores generally increases from the bottom to the top of the coal seam, whereas the proportion of pollen decreases. The vegetation in the coal seam is dominated by gymnosperms at the bottom and by ferns at the top. The paleographic precursor peat was most likely accumulated in the lakeshore where herbaceous and bushy helophytes were dominant. The total sulfur content was positively related to the huminite content. The sulfur content was possibly derived from bacterial action with sulfur brought in via marine incursions. Three overall declining-increasing values of carbon isotopes within the No. 5 coal seam possibly indicated three general cooling trends during peat accumulation. The environment of peat accumulation included three cycles, including one drying-wetting-drying in the bottom part and two drying-upwards cycles in the upper part. These cycles of the peat-accumulation environment could likely be ascribed to climate change because of their good agreement with humidity signals from plant types at that stage. View Full-Text
Keywords: Shengli coalfield; thick coal seam; coal petrology; geochemistry; palynology; peat-forming environment Shengli coalfield; thick coal seam; coal petrology; geochemistry; palynology; peat-forming environment
►▼ Show Figures 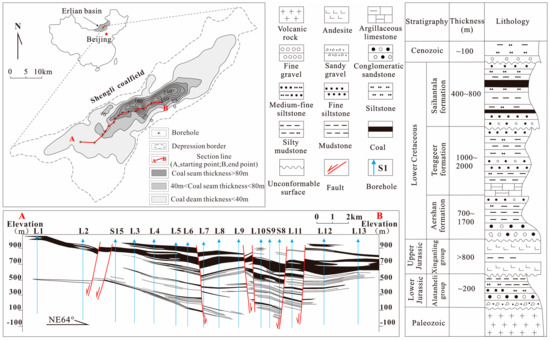