High-uranium (U) coal is the dominant form of coal in Southwestern China. However, directly utilizing this resource can also harm the environment because this element is radioactive; it is, therefore, necessary to clean this kind of coal before burning. This research studied the geochemistry of toxic elements and their partitioning during the preparation of high-U coal in China. The results show that high-U coals are mainly distributed in Southwestern China and are characterized by a high organic sulfur (S) content and vanadium (V)-chromium (Cr)-molybdenum (Mo)-U element assemblage. These elements are well-correlated with one another, but are all negatively related to ash yield, indicating that all four are syngenetic in origin and associated with organic materials. A mineralogical analysis shows that U in Ganhe and Rongyang coal occurs within fine-grained anatase, clay minerals, guadarramite, and pyrite, while V occurs in clay minerals, pyrite, and dolomite, and Cr occurs in dolomite. Other elements, such as fluorine (F), lead (Pb), selenium (Se), and mercury (Hg), mainly occur in pyrite. By applying a gravity separation method to separate minerals from coal, the content of the enrichment element assemblage of V-Cr-Mo-U in Rongyang coal is still shown to be higher than, or close to, that of the original feed because this element assemblage is derived from hydrothermal fluids during syngenetic or early diagenetic phases, but other elements (beryllium [Be], F, manganese [Mn], zinc [Zn], Pb, arsenic [As], Se, Hg) can be efficiently removed. Once cleaned, the coal obtained by gravity separation was subject to a flotation test to separate minerals; these results indicate that while a portion of V and Cr can be removed, Mo and U remain difficult to extract. It is evident that the two most commonly utilized industrialized coal preparation methods, gravity separation and flotation, cannot effectively remove U from coal where this element occurs in large proportions. Finally, dilute hydrochloric acid (HCl) leaching experiments show that the majority of Mo and a portion of V, Cr, and U are adsorbed in clay minerals and organic matter and, therefore, exist in an adsorbed state. In this state, these elements can be removed using the acid method. Thus, as U cannot be fully removed from coal, the use of high-U coals is not recommended. View Full-Text
Keywords: coal of Southwestern China; high-uranium coal; mode of occurrence; acid leaching method; coal preparation coal of Southwestern China; high-uranium coal; mode of occurrence; acid leaching method; coal preparation
►▼ Show Figures 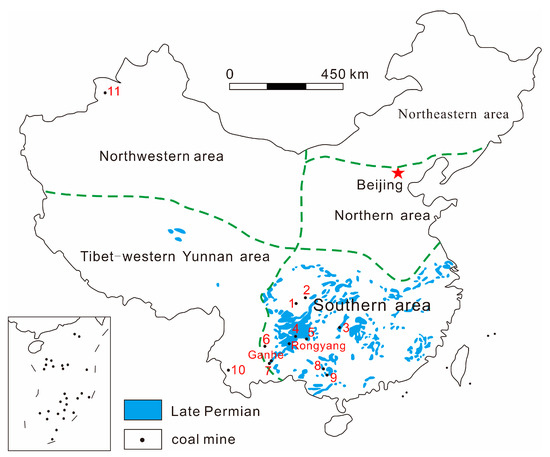