Decoding of Mantle Processes in the Mersin Ophiolite, Turkey, of End-Member Arc Type: Location of the Boninite Magma Generation
Previous Article in Journal

Petrology of Peridotites and Nd-Sr Isotopic Composition of Their Clinopyroxenes from the Middle Andaman Ophiolite, India

An Alternative Scenario on the Origin of Ultra-High Pressure (UHP) and Super-Reduced (SuR) Minerals in Ophiolitic Chromitites: A Case Study from the Mercedita Deposit (Eastern Cuba)

The origin of the assemblage of ultra-high pressure (UHP), super-reduced (SuR) and several crustally derived phases in ophiolitic chromitites is still hotly debated. In this paper, we report, for the first time, this assemblage of phases in ophiolitic chromitites of the Caribbean. We studied the Mercedita chromitite deposit in the eastern Cuban ophiolitic complexes. The mineral phases were characterized using microRaman spectroscopy, energy-dispersive spectroscopy with a scanning electron microscope (SEM-EDS), X-ray microdiffraction and electron microprobe analyses. Mineral concentrates were prepared using hydroseparation techniques. We have identified oriented clinopyroxene lamellae in chromite, oriented rutile lamellae in chromite, moissanite hosted in the altered matrix of the chromitite, graphite-like amorphous carbon, corundum and SiO2 hosted in healed fractures in chromite grains, and native Cu and Fe–Mn alloy recovered in heavy-mineral concentrates obtained by hydroseparation. This assemblage may correspond to UHP-SuR conditions, implying recycling of chromitite in the mantle or formation of the chromite grains at deep mantle depths, followed by emplacement at a shallow level in the mantle. However, the chromitite bodies contain gabbro sills oriented parallel to the elongation of the chromitite lenses, and these show no evidence of HP/UHP metamorphism. Therefore, the identified “exotic” phases may not be indicative of UHP. They formed independently as oriented clinopyroxene lamellae in chromite during cooling (clinopyroxene and rutile), in super-reduced microenvironments during the serpentinization processes, and by transference of subducted crustal material to the mantle wedge via cold plumes. View Full-Text
Keywords: moissanite; inclusions; Mercedita; serpentinization; super-reducing conditions; chromitites; ophiolites; Cuba moissanite; inclusions; Mercedita; serpentinization; super-reducing conditions; chromitites; ophiolites; Cuba
►▼ Show Figures 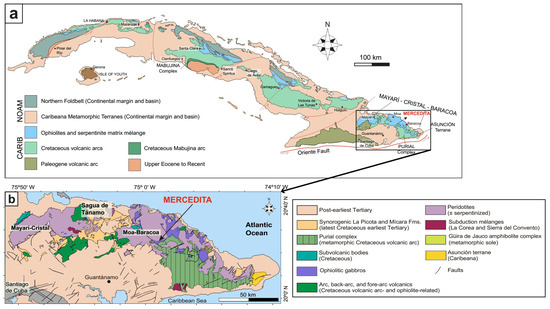