Thermoelastic Properties of K0.7Na0.3AlSi3O8 Hollandite and NaAlSi2O6 Jadeite: Implication for the Fate of the Subducted Continental Crust in the Deep Mantle
Previous Article in Special Issue

Interphase REE Partitioning at the Boundary between the Earth’s Transition Zone and Lower Mantle: Evidence from Experiments and Atomistic Modeling

Trace elements play a significant role in interpretation of different processes in the deep Earth. However, the systematics of interphase rare-earth element (REE) partitioning under the conditions of the uppermost lower mantle are poorly understood. We performed high-pressure experiments to study the phase relations in key solid-phase reactions CaMgSi2O6 = CaSiO3-perovskite + MgSiO3-bridgmanite and (Mg,Fe)2SiO4-ringwoodite = (Mg,Fe)SiO3-bridgmanite + (Mg,Fe)O with addition of 1 wt % of REE oxides. Atomistic modeling was used to obtain more accurate quantitative estimates of the interphase REE partitioning and displayed the ideal model for the high-pressure minerals. HREE (Er, Tm, Yb, and Lu) are mostly accumulated in bridgmanite, while LREE are predominantly redistributed into CaSiO3. On the basis of the results of experiments and atomistic modeling, REE in bridgmanite are clearly divided into two groups (from La to Gd and from Gd to Lu). Interphase REE partition coefficients in solid-state reactions were calculated at 21.5 and 24 GPa for the first time. The new data are applicable for interpretation of the trace-element composition of the lower mantle inclusions in natural diamonds from kimberlite; the experimentally determined effect of pressure on the interphase (bridgmanite/CaSiO3-perovskite) REE partition coefficients can be a potential qualitative geobarometer for mineral inclusions in super-deep diamonds. View Full-Text
Keywords: Earth’s lower mantle; transition zone; high-pressure experiment; bridgmanite; CaSiO3-perovskite; ferropericlase; REE partitioning; atomistic modeling Earth’s lower mantle; transition zone; high-pressure experiment; bridgmanite; CaSiO3-perovskite; ferropericlase; REE partitioning; atomistic modeling
►▼ Show Figures 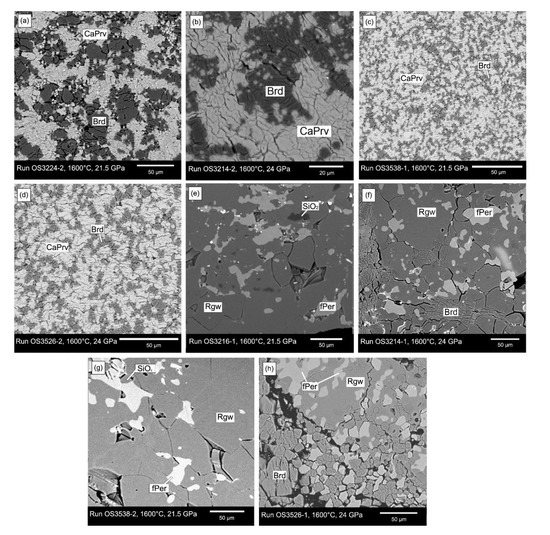