Variation and Correlations in Departures from Symmetry of Brain Torque, Humeral Morphology and Handedness in an Archaeological Sample of Homo sapiens

The anatomical asymmetries of the human brain are the subject of a great deal of scientific interest because of their links with handedness and lateralized cognitive functions. Information about lateralization in humans is also available from the post-cranial skeleton, particularly the arm bones, in which differences in size and shape are related to hand/arm preference. Our objective here is to characterize the possible correlations between the endocranial and post-cranial asymmetries of an archaeological sample. This, in turn, will allow us to try to identify and interpret prospective functional traits in the archaeological and fossil records. We observe that directional asymmetry (DA) is present both for some endocranial and humeral traits because of brain lateralization and lateralized behaviors, while patterns of fluctuating asymmetry (FA) vary. The combined study of these anatomical elements and of their asymmetries can shed light on the ways in which the body responds to dependent asymmetrical stimuli across biologically independent anatomical areas. Variations in FA are, in this context, indicators of differences in answers to lateralized factors. Humeri tend to show a much larger range of variation than the endocast. We show that important but complex information may be extracted from the combined study of the endocast and the arms in an archaeological sample of Homo sapiens.
Keywords: lateralization; directional asymmetry; fluctuating asymmetry; brain endocast; biomechanical properties; human behavior lateralization; directional asymmetry; fluctuating asymmetry; brain endocast; biomechanical properties; human behavior

The analyzed sample consists of 32 adult individuals with a preserved skull and pair of humeri. The population studied was excavated from a cemetery located in Ostrów Lednicki (West Poland) which is an island on Lednica Lake. This archaeological site is dated to a period extending from the 10th to the end of the 13th century [44]. The sex and age of the individuals were assessed according to the standards of Buikstra and Ubelaker [45] and White and Folkens [46] using features of the skull, pelvic morphology and changes in the auricular surfaces of the illium. Only individuals with no observable pathological changes in the analyzed bones (e.g., fractures, osteophytes, porosity) were accepted for this analysis. The individuals from this medieval population belonged to a homogeneous society in terms of their socioeconomic status [47], and their economy was based mainly on agriculture, with the addition of animal husbandry and hunting [48,49].
In order to analyze the association between the asymmetries of the endocast and arms, the skulls and pairs of humeri belonging to 32 adult individuals were scanned using computed tomography (CT). All material was scanned in the same cranio-caudal position with a standard protocol (0.625 × 0.625 × 0.625 mm3 cubic voxels), using 32-slice CT (Siemens SOMATOM Sensation). Next, for each skull, a reconstruction of the endocast was prepared using the endomaker R package [50,51].

First, we tested, for each analyzed trait, whether there were correlations between variations in departures from symmetry and their global size, using the Bonferroni correction for multiple testing. We compared the maximal length of the skull with the values for |R-L| (without any size correction) for all the endocranial traits. The results of the Spearman test of association are non-significant. We have also compared values for |R-L| for all the humeral traits with corresponding trait sizes. The results of the Spearman test of association are non-significant for all the analyzed traits. As a result, all subsequent analyses are conducted on size-corrected data in relation with this first result, but also, and more importantly, in order to allow for a direct comparison of endocranial and humeri data.
We then searched for possible aberrant values in our database of relative measurements. Grubbs’ test statistic identified two significant outlier data within our database of size-corrected measurements (7.78, p = 0.035 for the vertical component of the occipital petalia in one individual and 11.41, p = 0.012 for Imax/Imin in another). Those data were excluded from subsequent analyses of asymmetry, explaining why N is only 31 for these two parameters and 32 for all the others (Table 2). We tested the sample for putative sex-related variation and found that the means for males and females do not differ (Hotelling’s T-squared tests) for any of the analyzed traits. As a result, all the following analyses are done on the complete pooled sample.
Several parameters were considered to describe the variation for each of the analyzed traits (Table 2) and the distribution for each trait has been explored and is illustrated (Figure 2 and Figure 3).
Shapiro–Wilk tests show that the different traits analyzed all follow a Gaussian distribution, with the exception of the vertical component of the occipital petalia (W = 0.92, p = 0.025).
We searched for indicators of DA. Based on simple t-tests followed by a Bonferroni correction (Table 2), DA is significantly different from zero for the AP component of the frontal petalia (mean = 0.25, t = 2.52, p = 0.034), the AP component of the occipital petalia (mean = −0.66, t = −3.52, p = 0.004), the lateral component of the occipital petalia (mean = 1.87, t = 2.23, p = 0.04), HBIOL (mean = 1.73, t = 6.16, p = 0.00004) and Imax/Imin (mean = −7.56, t = −5.41, p = 0.0003).
Different observations are informative of the patterns of variation around the mean for departures from symmetry (Table 2 and Figure 2). The AP component of the occipital petalia is significantly leptokurtic (2.31, p < 0.05) and significantly skewed (ts = 2.31, p < 0.05). Mean (R-L) is inferior to FA4a for all endocranial traits, as well as for J and %CA. On the contrary, mean value for DA HBIOL (1.73) is superior to the value of FA4a for this trait (1.25). The mean value for DA Imax/Imin (−7.56) is large compared to FA4a (6.33). Among all the analyzed traits, J and Imax/Imin show a large range of variation as expressed by different indicators, including FA4a (Table 2) compared to the other traits. Globally, the variation observed for each of the endocranial traits is lower than that observed on the humeri (Table 2 and Figure 3).
Finally, we considered the possible correlation between endocranial and humeri traits. Among the analyzed sample, 27 individuals (84.4%) follow the classic pattern of RF/LO petalia, as described by Holloway et al. [20], four have a RF/RO pattern and only one has the opposite pattern to the most frequent one, LF/RD. Among these five latter individuals who do not conform to the most common petalial pattern, four share an asymmetry pattern of the upper arm which is only observed in seven of the 32 individuals in the sample, with a right humerus longer that the left one (HBIOL) while all internal parameters related to bone structure show leftward asymmetry (J, %CA, Imax/Imin). A total of 28 individuals have a right humerus longer that the left one (HBIOL) and 27 out of 31 have a value for Imax/Imin which is larger on the left side compared to the right side.
A non-parametric (Spearman’s coefficient of rank correlation) test of association was used to test the relationship between the magnitude of the petalias and those of the traits measured on the humeri. After Bonferroni correction, a significant correlation is observed between the antero-posterior and the lateral components of the occipital petalia (rs = −0.-63; p = 0.0018) and between HBIOL and J (rs = −0.57, p = 0.028). No significant correlation is observed between any endocranial trait and any trait quantified on the humeri.

The authors thank the reviewers for their helpful comments. We thank Anna Wrzesińska from the Museum of the First Piasts at Lednica, for giving the possibility to use skeletal material from Ostrów Lednicki. They also thank Dariusz Kurkiewicz for technical support in scanning the osteological material and Antonio Profico for help in improving the methodology of 3D endocast reconstruction. Anna Maria Kubicka thanks the Polish National Agency for Academic Exchange (NAWA) for the scholarship at the Musée de l’Homme, which allowed to conduct this research. 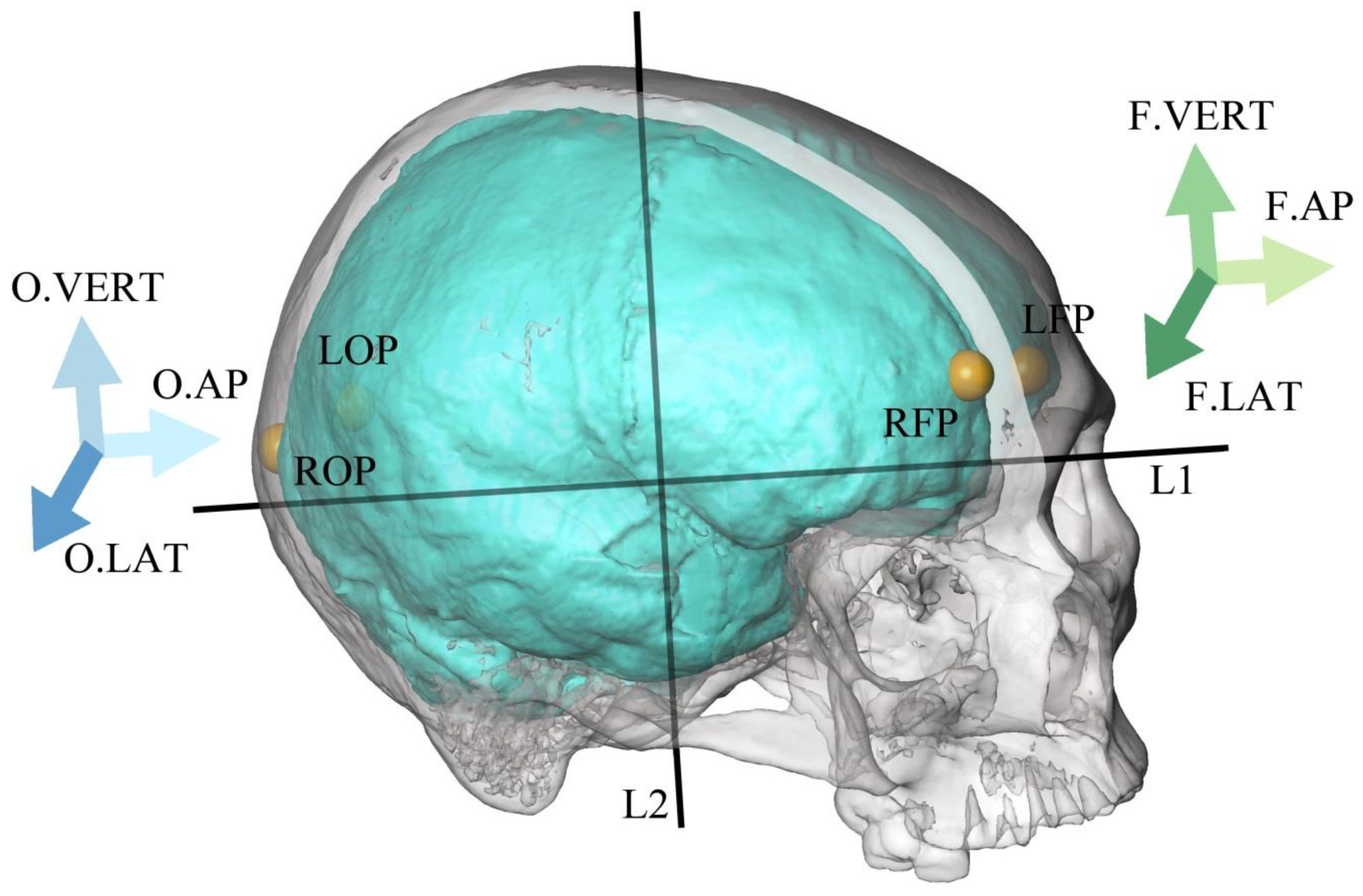 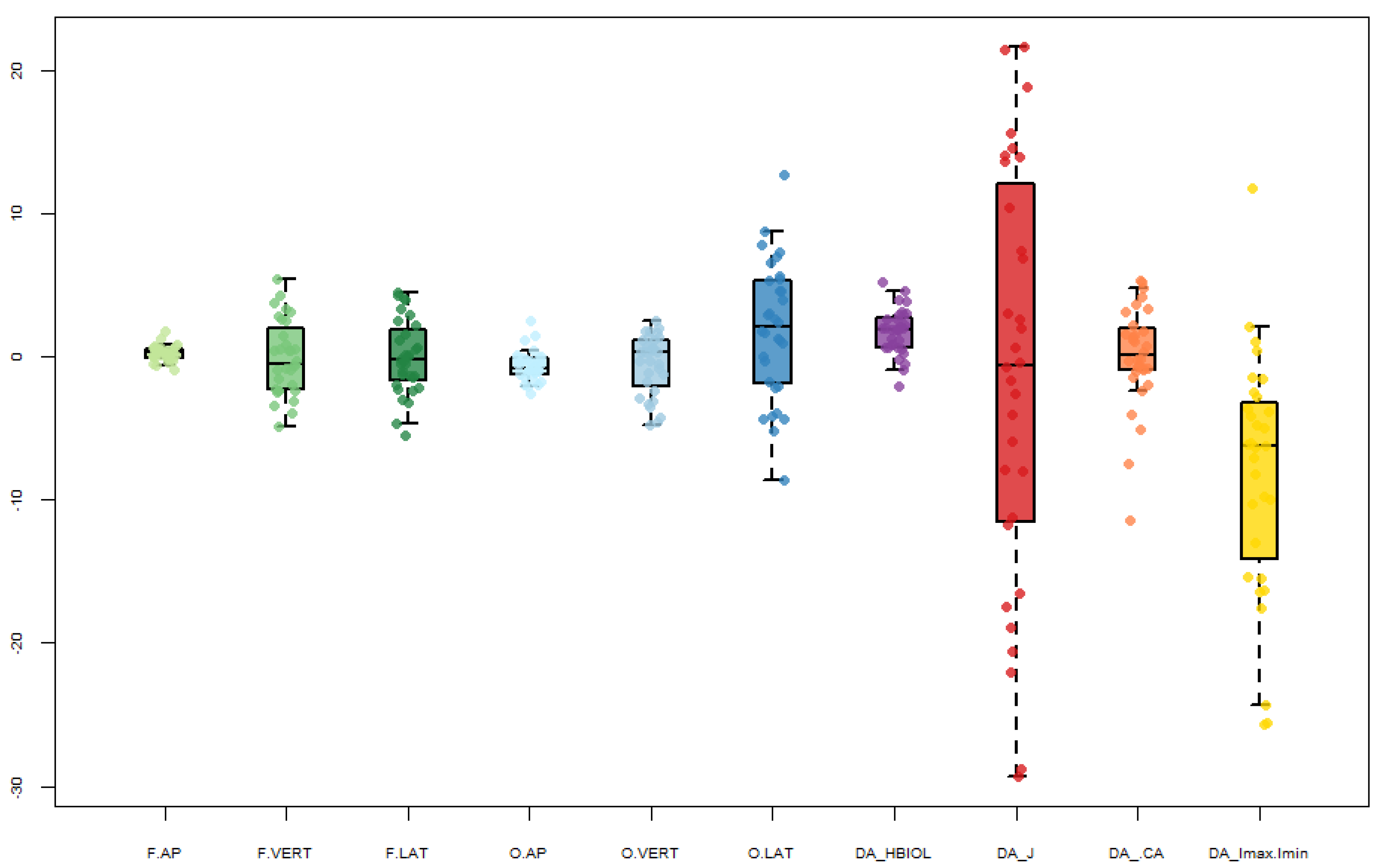