Land Use/Land Cover Data of the Urban Atlas and the Cadastre of Real Estate: An Evaluation Study in the Prague Metropolitan Region

Landscape research involves a large number of scientific disciplines. Different disciplinary and scale approaches have led to the creation of numerous land use/land cover databases with different classification nomenclature. It is very important for end-users of databases to know the capabilities and limits of land use/land cover data to avoid potential mistakes resulting from inappropriate combinations and interpretations. In this context, the aim of this study was to evaluate the thematic content of the Urban Atlas database and data from the Czech cadastre of real estate in the Prague metropolitan region between the years 2006 and 2012 with a focus on the meaning of the nomenclature used by both datasets. The data were processed using approaches with different levels of thematic harmonisation and statistical tools to quantify the similarities and differences among the researched data. The methods of comparison used for land use/land cover data with different nomenclature were based on an aggregation approach or modified difference indices (the overall difference index and the sub-index of the difference). The areas with high degrees of dissimilarity and similarity were found and further examined and interpreted. These intentions were documented precisely on the Czech cadastre of real estate and the Urban Atlas databases at two scale levels: 1) an analysis of the whole area of the Prague metropolitan region and 2) a detailed analysis of the selected cadastral units. It was proven that the differences between both datasets are significant and they share certain characteristics. Most of the differences are distributed in the classes of the built-up areas, gardens, and other areas. Smaller differences are characteristic for waterways, agricultural lands, and forests. This study provides relevant information on the evaluated databases with the intention of raising awareness of their limits, strengths, and weaknesses. The results enhance the scientific knowledge about the Urban Atlas and Czech cadastre of real estate databases, thereby facilitating decision-making about the options of their use. View Full-Text
Keywords: Urban Atlas; cadastre of real estate; land use; land cover; harmonisation; Prague; Czechia Urban Atlas; cadastre of real estate; land use; land cover; harmonisation; Prague; Czechia
►▼ Show Figures 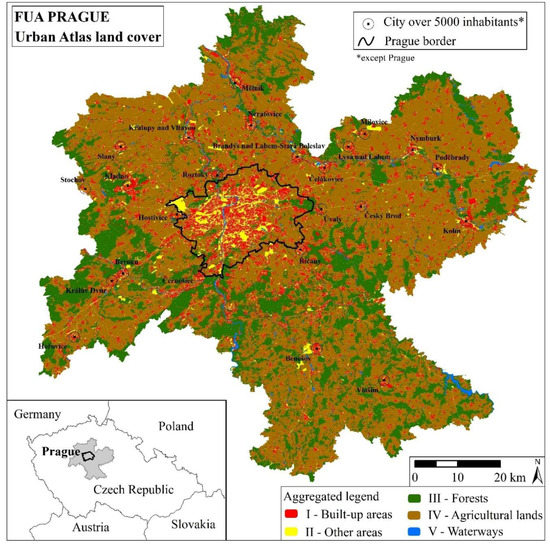 
Micek, Ondrej; Feranec, Jan; Stych, Premysl. 2020. "Land Use/Land Cover Data of the Urban Atlas and the Cadastre of Real Estate: An Evaluation Study in the Prague Metropolitan Region." Land 9, no. 5: 153.