Do Consumers of Environmentally Friendly Farming Products in Downstream Areas Have a WTP for Water Quality Protection in Upstream Areas?
Next Article in Special Issue

In order to simulate food web responses of small boreal lakes to changes in thermal stratification due to global warming, a 4 year whole-lake manipulation experiment was performed. Within that time, period lake mixing was intensified artificially during two successive summers. Complementary data from a nearby lake of similar size and basic water chemistry were used as a reference. Phytoplankton biomass and chlorophyll a did not respond to the greater mixing depth but an increase was observed in the proportional abundance of diatoms, and the proportional abundance of cryptophytes also increased immediately after the onset of mixing. Obligate anoxic green sulphur bacteria vanished at the onset of mixing but gradually recovered after re-establishment of hypolimnetic anoxic conditions. No major effect on crustacean zooplankton was found, but their diversity increased in the metalimnion. During the mixing, the density of rotifers declined but protozoan density increased in the hypolimnion. Littoral benthic invertebrate density increased during the mixing due to Ephemeroptera, Asellus aquaticus and Chironomidae, whereas the density of Chaoborus larvae declined during mixing and lower densities were still recorded one year after the treatment. No structural changes in fish community were found although gillnet catches increased after the onset of the study. The early growth of perch (Perca fluviatilis) increased compared to the years before the mixing and in comparison to the reference lake, suggesting improved food availability in the experimental lake. Although several food web responses to the greater mixing depth were found, their persistence and ecological significance were strongly dependent on the extent of the disturbance. To better understand the impacts of wind stress on small lakes, long term whole-lake experiments are needed. View Full-Text
Keywords: lakes; climate change; global warming; thermocline manipulation ecological responses; ecological forecasting; ecosystem services; humic lake; food web management lakes; climate change; global warming; thermocline manipulation ecological responses; ecological forecasting; ecosystem services; humic lake; food web management
►▼ Show Figures 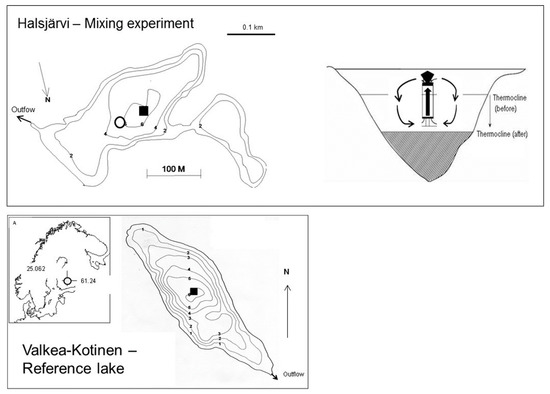