Migration of 238U and 226Ra Radionuclides in Technogenic Permafrost Taiga Landscapes of Southern Yakutia, Russia
Previous Article in Journal

The Morphological and Functional Organization of Cattails Typha laxmannii Lepech. and Typha australis Schum. and Thonn. under Soil Pollution by Potentially Toxic Elements

The aim of this study is to investigate the adaptation of two species of cattail Typha australis Schum. and Thonn. and Typha laxmannii Lepech. based on analysis of the morphological and anatomical features of their vegetative and generative organs to soil pollution with potentially toxic elements (PTE) in the riparian zones of the sea edge of the Don River delta (Southern Russia). Both species of the cattail are able to accumulate high concentrations of Ni, Zn, Cd, Pb and can be used for phytoremediation of polluted territories. The pattern of PTE accumulation in hydrophytes has changed on polluted soils of coastal areas from roots/rhizomes > inflorescences > stems to roots/rhizomes > stems ≥ inflorescences. The comparative morphological and anatomical analysis showed a statistically significant effect of the environmental stress factor by the type of proliferation in T. australis, and species T. laxmannii was visually in a depressed, deformed state with mass manifestations of hypogenesis. These deformations should be considered, on one hand, as adaptive, but on the other, as pathological changes in the structure of the spikes of the cattails. Light-optical and electron microscopic studies have shown that the degree and nature of ultrastructural changes in cattails at the same level of soil pollution are different and most expressed in the assimilation tissue of leaves. However, these changes were destructive for T. australis, but for T. laxmannii, these indicated a high level of adaptation to the prolonged technogenic impact of PTE. View Full-Text
Keywords: fluvisols; potentially toxic elements; hydrophytes; bioaccumulation; riparian zone; adaptation; morphological features; anatomical features; ultrastructure fluvisols; potentially toxic elements; hydrophytes; bioaccumulation; riparian zone; adaptation; morphological features; anatomical features; ultrastructure
►▼ Show Figures 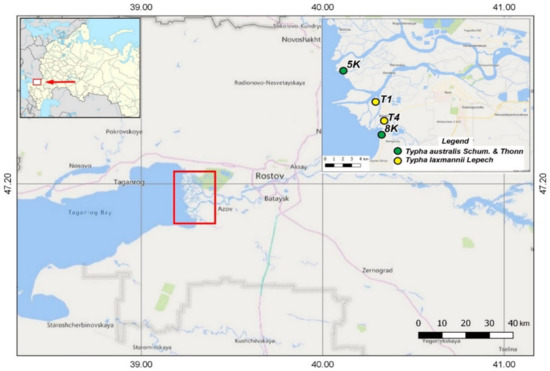