The cheese whey (95% composed of water) is an effluent produced in the cheese industry, of which more than 1.5 million tons are generated in Spain, constituting a serious environmental problem. The process starts with a new fermentative/enzymatic technology that totally converts whey, mainly composed by lactose, proteins, and salts, into a fermented product with higher added value. This new product is mainly composed by lactic acid bacteria biomass, ammonium lactate, and a protein hydrolysate. To separate valuable fractions, this fermented product is processed by a two-stage membrane system, which is a very innovative process in this type of fermented product. The first stage consists of ultrafiltration to separate all suspended solids. As a result of this stage, a product mainly constituted by lactic acid bacteria that have both agronomic applications, mainly as a biocontrol and biofertilizer/bio-stimulant, and applications in animal feeding as a probiotic, is obtained. The second stage consists of reverse osmosis used to concentrate the ultrafiltered permeate obtained earlier, leading to a microbiologically stable product and reducing transport costs. The concentrate is mainly composed of ammonium lactate and a protein hydrolysate, constituted by peptides and free amino acids, which has application both in agriculture as a bio-stimulant and in animal feeding, and the permeate is water, reusable in other industrial processes. This work demonstrates the technical feasibility of this valorization process to achieve the objective of “Waste 0” from a problematic by-product, while obtaining products with commercial utility. View Full-Text
Keywords: fermentation; membrane fractionation; ultrafiltration; reverse osmosis fermentation; membrane fractionation; ultrafiltration; reverse osmosis
►▼ Show Figures 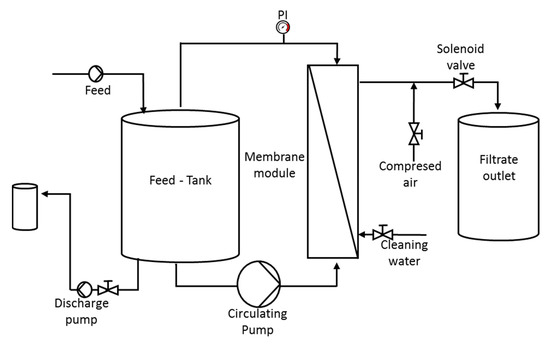