Alien Crayfish Species in the Deep Subalpine Lake Maggiore (NW-Italy), with a Focus on the Biometry and Habitat Preferences of the Spiny-Cheek Crayfish
Previous Article in Special Issue

Compared to external loads from tributaries and sediment recycling, the role of waterbirds as phosphorus (P) sources in estuaries is overlooked. We performed monthly ship-based surveys of waterbird abundance in the Lithuanian part of the Curonian Lagoon, calculated their potential P excretion, and compared its relevance to the riverine inputs. Phosphorus excretion rates for the censused species were assessed accounting for variations of body weights, daily feces production and their P content, and assigning species to different feeding and nutrient cycling guilds. During the study period (March–November 2018), 32 waterbird species were censused, varying in abundance from ~18,000–32,000 (October–November) to ~30,000–48,000 individuals (June–September). The estimated avian P loads during the whole study period varied between 3.6 and 25 tons, corresponding to an area load between 8.7 and 60.7 mg P m−2. Waterbird release of reactive P to the system represented a variable but not negligible fraction (1%–12%) of total external P loads, peaking in June–September and coinciding with cyanobacterial blooms. This study is the first in the Baltic Sea region suggesting that waterbirds are potentially important P sources to phytoplankton in large estuaries, in particular, during low discharge periods. View Full-Text
Keywords: estuary; bird; guilds; visual counts; feces; phosphorus source; algal blooms estuary; bird; guilds; visual counts; feces; phosphorus source; algal blooms
►▼ Show Figures 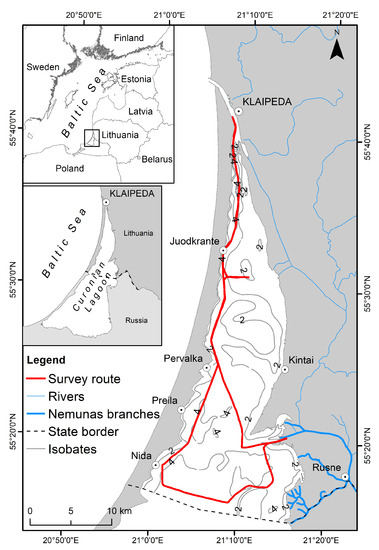