Key Determinants of Freshwater Gastropod Diversity and Distribution: The Implications for Conservation and Management
Previous Article in Journal

Alien Crayfish Species in the Deep Subalpine Lake Maggiore (NW-Italy), with a Focus on the Biometry and Habitat Preferences of the Spiny-Cheek Crayfish

Invasive alien species are a major threat to biodiversity. Thus, it is fundamental to implement control strategies at the early stages of invasions. In the framework of the Italian-Swiss Alien Invasive Species in Lake Maggiore cooperative programme, we performed an extensive study on the occurrence and ecology of alien crayfish, one of the most significant invaders of freshwater habitats. From April 2017 to July 2018, we inspected seventy-five sites along the coastline to verify crayfish occurrence. We recorded, for the first time, the signal crayfish Pacifastacus leniusculus. Additionally, we found few individuals and remains of the red swamp crayfish Procambarus clarkii, and confirmed the presence of a consistent population of the spinycheek crayfish Orconectes limosus. Given the high number of O. limosus’ individuals found, it was possible to perform in-depth biometric and ecological analyses for this abundant species only. We observed no significant differences of biometric measures between males and females of O. limosus. We explore its habitat preferences with a generalized linear model, detecting a significant relationship between mean annual temperatures and the presence of shelters of this species. These results, together, have direct implications for planning rapid management response actions on alien crayfish in large and deep lakes. View Full-Text
Keywords: lakes; invasion biology; non-indigenous species; Procambarus Clarkii; Pacifastacus Leniusculus; Orconectes Limosus lakes; invasion biology; non-indigenous species; Procambarus Clarkii; Pacifastacus Leniusculus; Orconectes Limosus
►▼ Show Figures 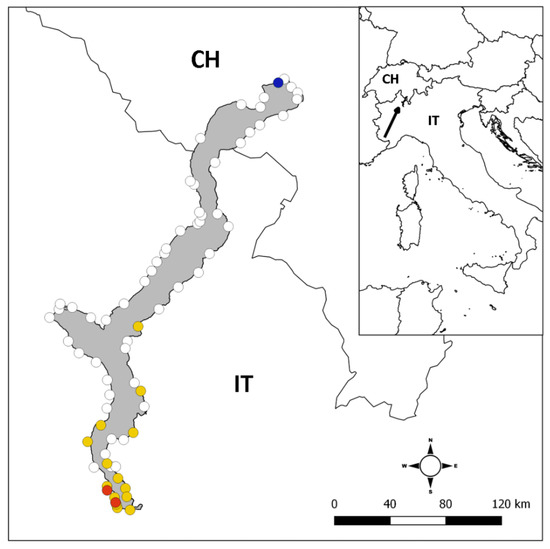