Effects of Waterlogging, Drought and Their Combination on Yield and Water-Use Efficiency of Five Hungarian Winter Wheat Varieties
Previous Article in Special Issue

Qihua Ran
*
Institute of Hydrology and Water Resources, Zhejiang University; Hangzhou 310058, China
*
Author to whom correspondence should be addressed.
Water 2020, 12(5), 1319; https://doi.org/10.3390/w12051319
Received: 2 April 2020 / Revised: 1 May 2020 / Accepted: 3 May 2020 / Published: 7 May 2020
(This article belongs to the Special Issue Advances in Modelling and Prediction on the Impact of Human Activities and Extreme Events on Environments)
View Full-Text Download PDF
Browse Figures
Citation Export
BibTeX
EndNote
RIS
Cite This Paper

As one of the most widespread engineering structures for conserving water and soil, check dams have significantly modified the local landform and hydrologic responses. However, the influences of sedimentary lands caused by filled up check dams on the runoff and sediment transport processes were seldom studied. Employing an integrated hydrologic-response and sediment transport model, this study investigated the influences of filled check dams with different deployment strategies in a Loess Plateau catchment. Six hypothetical deployment strategies of check dams were compared with no-dam scenario and the reality scenario. Results showed that filled check dams were still able to reduce Flood peak (Qp) by 31% to 93% under different deployment strategies. Considerable delays of peak time and decreases were also found in scenarios, which were characterized as having larger and more connective sedimentary lands on the main channel. Reduction rates of Sediment yield (SY) and the total mass of Eroded sediment (ES) ranged from 4% to 52% and 2% to 16%, respectively, indicating that proper distributions of check dams can promote sediment deposition in the channel and reduce soil erosion. The results of this study indicate that (1) check dam systems could still be useful in flood attenuation and sediment control even when they were filled, and (2) optimizing the deployment strategies of check dams can help reduce erosion. View Full-Text
Keywords: check dam system; sedimentary land; flood control; sediment transport; Loess Plateau check dam system; sedimentary land; flood control; sediment transport; Loess Plateau
►▼ Show Figures 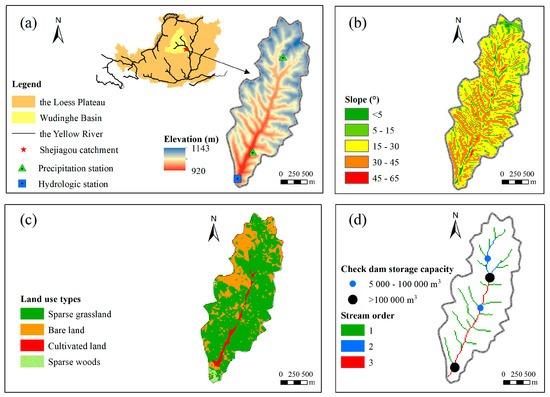