Heavy Metals in a High Arctic Fiord and Their Introduction with the Wastewater: A Case Study of Adventfjorden-Longyearbyen System, Svalbard

The paper analyses changes in potential evaporation E0 (mm) in north-western Poland in the years 1952–2018. E0 (mm) has been calculated according to Ivanov’s formula based on the monthly values of air temperature (t, °C) and relative air humidity (f, %) for six weather stations of the Institute of Meteorology and Water Management. The data were collected using the Statistica software ver. 13 and the QGIS software ver. 3.80. The results indicate statistically significant trends in the increase of E0 during the period 1952–2018, and that it is particularly high during the spring and summer months, which should be associated with a statistically significant increase in air temperature and a decrease in relative humidity at all examined stations. The results also indicate an exceptionally high increase in evaporation since the end of the 20th century and in the 21st century, which reflects a potentially higher risk of permanent changes in hydrological conditions. The research results point to the major role of climatic factors in the often-dramatic decreases in water resources observed in the 21st century, particularly in lakes and small watercourses. The progressing reduction of water resources may cause permanent changes in physical and chemical conditions in waterbodies. View Full-Text
Keywords: potential evaporation; climate changes; hydrological conditions; physical and chemical conditions in waterbodies; north-western Poland potential evaporation; climate changes; hydrological conditions; physical and chemical conditions in waterbodies; north-western Poland
►▼ Show Figures 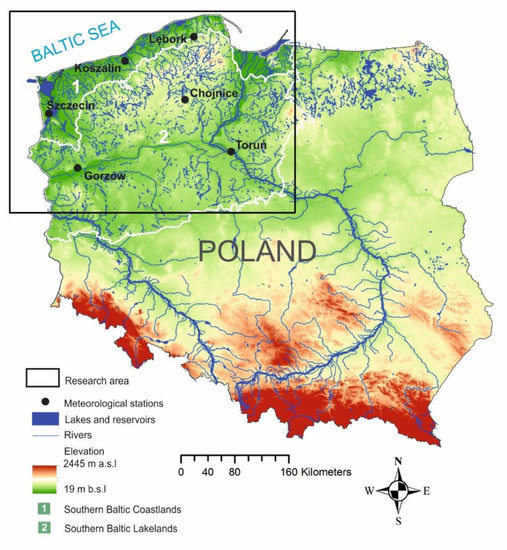 Okoniewska, M.; Szumińska, D. Changes in Potential Evaporation in the Years 1952–2018 in North-Western Poland in Terms of the Impact of Climatic Changes on Hydrological and Hydrochemical Conditions. Water 2020, 12, 877.


Okoniewska M, Szumińska D. Changes in Potential Evaporation in the Years 1952–2018 in North-Western Poland in Terms of the Impact of Climatic Changes on Hydrological and Hydrochemical Conditions. Water. 2020; 12(3):877.


Okoniewska, Monika; Szumińska, Danuta. 2020. "Changes in Potential Evaporation in the Years 1952–2018 in North-Western Poland in Terms of the Impact of Climatic Changes on Hydrological and Hydrochemical Conditions." Water 12, no. 3: 877.