Groundwater resources worldwide are being depleted at alarming rates since 1960 to support agriculture, industry, and domestic water demand. Water harvesting and the implementation of reduced application or more efficient irrigation technologies were identified as two of the most efficient practices to mitigate the declining patterns on groundwater resources. However, prior to implementing these practices, understanding how groundwater interacts with surface water and responds to natural and anthropogenic stressors is crucial. Integrated modeling tools that are able to exchange fluxes in both domains are needed to assess how conservation practices will affect our water resources under different projected climate and land use scenarios. This study aimed to evaluate the most likely impacts of current land management practices under the most severe projections of future climate and quantify the potential mitigation effects of three conservation scenarios on the water resources of the Fort Cobb Reservoir Experimental Watershed (FCREW) in western Oklahoma. The semicoupled SWAT-MODFLOW (SWATmf) model was used to simulate the hydrologic responses of the FCREW to a 50% reduction in the irrigation depths and the transition of 50% and 75% of croplands to rangelands under 32 distinct climate projections. Results showed that future climate can drive a reduction in the streamflow (−18%) and an increase to the depth of the water table (99%–120%) in the western part of the FCREW by the end of the century. The Fort Cobb Reservoir was expected to reduce its release after the mid-2060s to maintain its current target level. All the scenarios, aimed at decreasing groundwater extractions or implementing conservation measures, signaled a full recovery response in the groundwater levels 7–10 years after the year the conservation practices were implemented. The 50% reduction in the irrigation depths was found to elicit faster hydrologic systemic responses than the two that implemented conservation measures, which contravene tradition and would imply cessation of agricultural activities. This study can enable stakeholders to formulate timely adaptation and mitigating strategies to adopt to land use changes. View Full-Text
Keywords: risk; agricultural landscape; surface water; groundwater; climate projections; SWAT; MODFLOW; SWATmf risk; agricultural landscape; surface water; groundwater; climate projections; SWAT; MODFLOW; SWATmf
►▼ Show Figures 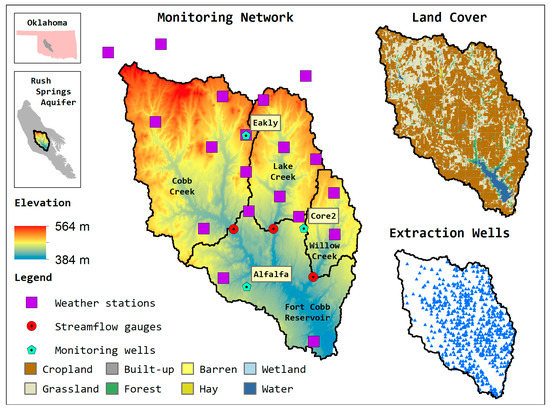