Karst aquifers have been an important research topic for hydrologists for years. Due to their high storage capacity, karst aquifers are an important source of water for the environment. On the other hand, it is safety-critical because of its role in floods. Mugla Karst Aquifer (SW, Turkey) is the only major water-bearing formation in the close environs of Mugla city. Flooding in the wet season occurs every year in the recharge plains. The aquifer discharges by the seaside springs in the Akyaka district which is the main touristic point of interest in the area. Non-porous irregular internal structures make the karsts more difficult to study. Therefore, many different methodologies have been developed over the years. In this study, unit hydrograph analysis, correlation and spectral analyses were applied on the rainfall and spring water-level time series data. Although advanced karst formations can be seen on the surface like the sinkholes, it has been revealed that the interior structure is not highly karstified. 100–130 days of regulation time was found. This shows that the Mugla Karst has quite inertial behavior. Yet, the storage of the aquifer system is quite high, and the late infiltration effect caused by alluvium plains was detected. This characterization of the hydrodynamic properties of the Mugla karst system represents an important step to consider the rational exploitation of its water resources in the near future. View Full-Text
Keywords: Mugla; Turkey; karstification level; classification; precipitation; spring water-level; recession; time series; correlation and spectral analysis Mugla; Turkey; karstification level; classification; precipitation; spring water-level; recession; time series; correlation and spectral analysis
►▼ Show Figures 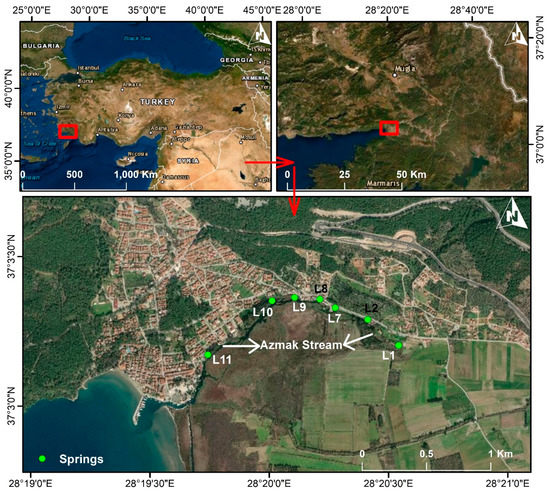