Alteration of land use and climate change are among the main variables affecting watershed hydrology. Characterizing the impacts of climate variation and land use alteration on water resources is essential in managing watersheds. Thus, in this research, streamflow and baseflow responses to climate and land use variation were modeled in two watersheds, the Upper West Branch DuPage River (UWBDR) watershed in Illinois and Walzem Creek watershed in Texas. The variations in streamflow and baseflow were evaluated using the Soil and Water Assessment Tool (SWAT) hydrological model. The alteration in land use between 1992 and 2011 was evaluated using transition matrix analysis. The non-parametric Mann–Kendall test was adopted to investigate changes in meteorological data for 1980–2017. Our results indicate that the baseflow accounted for almost 55.3% and 33.3% of the annual streamflow in the UWBDR and Walzem Creek watersheds, respectively. The contribution of both land use alteration and climate variability on the flow variation is higher in the UWBDR watershed. In Walzem Creek, the alteration in streamflow and baseflow appears to be driven by the effect of urbanization more than that of climate variability. The results reported herein are compared with results reported in recent work by the authors in order to provide necessary information for water resources management planning, as well as soil and water conservation, and to broaden the current understanding of hydrological components variation in different climate regions. View Full-Text
Keywords: streamflow; baseflow; SWAT; urbanization; climate alteration; Mann–Kendall streamflow; baseflow; SWAT; urbanization; climate alteration; Mann–Kendall
►▼ Show Figures 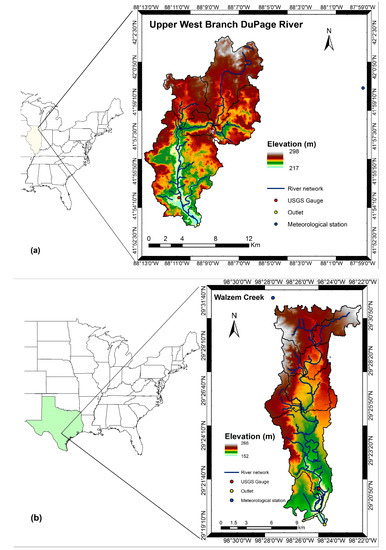 
Aboelnour, Mohamed; Gitau, Margaret W.; Engel, Bernard A. 2020. "A Comparison of Streamflow and Baseflow Responses to Land-Use Change and the Variation in Climate Parameters Using SWAT." Water 12, no. 1: 191.