Thermal pollution of rivers degrades water quality and ecosystem health, and cities can protect rivers by decreasing warmer impervious surface stormwater inflows and increasing cooler subsurface inflows and shading from riparian vegetation. This study develops the mechanistic i-Tree Cool River Model and tests if it can be used to identify likely causes and mitigation of thermal pollution. The model represents the impacts of external loads including solar radiation in the absence of riparian shade, multiple lateral storm sewer inflows, tributaries draining reservoirs, groundwater flow, and hyporheic exchange flow in dry weather steady flows and wet weather unsteady flows. The i-Tree Cool River Model estimates the shading effects of the riparian vegetation and other features as a function of heights and distances as well as solar geometry. The model was tested along 1500 m of a New York mountain river with a riparian forest and urban areas during 30 h with two summer storm events in 2007. The simulations were sensitive to the inflows of storm sewers, subsurface inflows, as well as riparian shading, and upstream boundary temperature inflows for steady and unsteady conditions. The model simulated hourly river temperature with an R2 of 0.98; when shading was removed from the simulation the R2 decreased 0.88, indicating the importance of riparian shading in river thermal modeling. When stormwater inflows were removed from the simulation, the R2 decreased from 0.98 to 0.92, and when subsurface inflows were removed, the R2 decreased to 0.94. The simulation of thermal loading is important to manage against pollution of rivers. View Full-Text
Keywords: River thermal pollution; Mechanistic model; Urban hydrology; Riparian shading; Heat balance River thermal pollution; Mechanistic model; Urban hydrology; Riparian shading; Heat balance
►▼ Show Figures 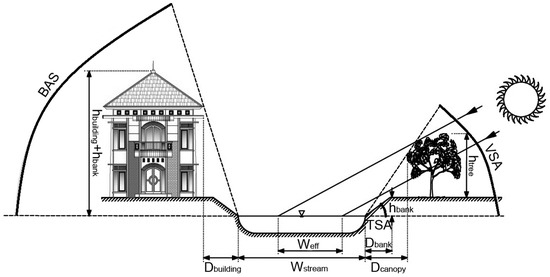