A data-based method to distinguish climate and land use change impacts on streamflow has been previously developed and needs further evaluation through a large sample study. This study aims to apply the method to a large sample set of 472 catchments in the United States and Australia. The method calculates the water and energy budget of a catchment which can be translated to climate and land use induced changes in streamflow between two periods: a pre-change and post-change period. Several geographical characteristics (e.g., aridity index, average catchment slope, historical land use) were considered for the interpretation of the results. The results show that in general as expected, an increase of the annual discharge is caused by deforestation and a wetter climate, and a decrease of the annual discharge is caused by afforestation and a drier climate. In addition, changes in streamflow of American catchments are likely caused by a wetter climate, while changes in streamflow of Australian catchments are caused by a wetter or drier climate. It can be concluded that the method performs reasonably well and that the results are best explained by the location of the catchment, the aridity index and historical land use. View Full-Text
Keywords: climate change; land use change; discharge; attribution; data-based; Australia; United States climate change; land use change; discharge; attribution; data-based; Australia; United States
►▼ Show Figures 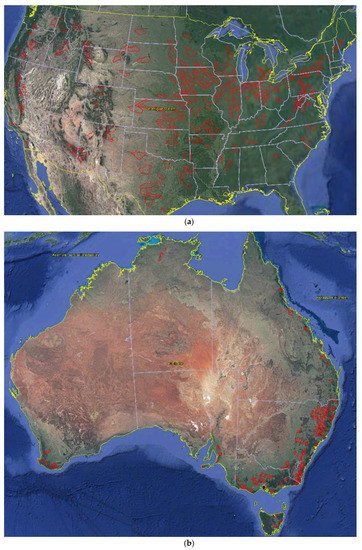 Booij, M.J.; Schipper, T.C.; Marhaento, H. Attributing Changes in Streamflow to Land Use and Climate Change for 472 Catchments in Australia and the United States. Water 2019, 11, 1059.


Booij MJ, Schipper TC, Marhaento H. Attributing Changes in Streamflow to Land Use and Climate Change for 472 Catchments in Australia and the United States. Water. 2019; 11(5):1059.