Effects of a Groundwater Heat Pump on Thermophilic Bacteria Activity

In the Lancang–Mekong River Basin, monsoon fluctuation affects profoundly the spatial and temporal distributions of precipitation, which is the major cause of the uncertainty in hydrological processes and water resources. This study investigated the implications of monsoon fluctuation and regional topography on precipitation variation in the Lancang–Mekong River Basin, and it examined the potential link between monsoons and river flow. The results indicated that the fluctuations of the western North Pacific summer monsoon (WNPSM) and the Indian summer monsoon (ISM) played different roles in precipitation variation. The areas in which precipitation variation was found synchronous with the WNPSM were much larger than those associated with the ISM. Significant positive correlation was found between precipitation during June–September (JJAS) and the WNPSM index (WNPMI) and the ISM index (IMI) over 29.3% and 12.8% of the basin, respectively, and that these areas were distributed mainly on the left and right bank downstream, respectively. A strong (weak) WNPSM was found to increase (decrease) moist westerlies that caused excess (deficient) orographic precipitation through the interaction with the Annamite Mountains. During strong (weak) WNPSM years, observed river flow during JJAS at the Mukdahan, Pakse, and Stung Treng stations in the downstream area were 8.0% (5.0%), 8.2% (12.6%), and 12.1% (19.5%) higher (lower) than the mean, respectively, showing that downstream river flow is modulated by the WNPSM intensity. These findings could support long-term hydrological predictions, and be beneficial for optimal flood control and water resource utilization in the basin. View Full-Text
Keywords: monsoon fluctuation; WNPSM; ISM; regional topography; river flow; the Lancang–Mekong River Basin monsoon fluctuation; WNPSM; ISM; regional topography; river flow; the Lancang–Mekong River Basin
►▼ Show Figures 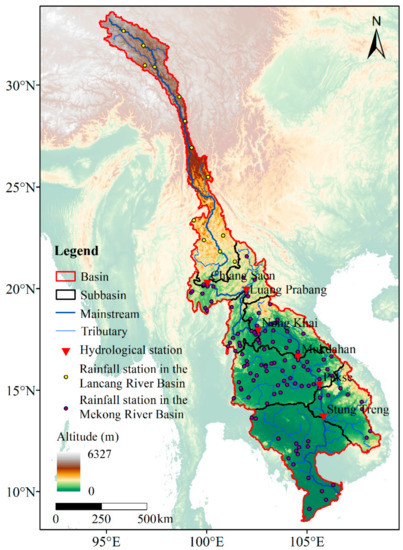