A Paradigm Shift in Water Quality Governance in a Transitional Context: A Critical Study about the Empowerment of Local Governance in Georgia
Next Article in Special Issue

Mount Shasta (4322 m) is famous for its spring water. Water for municipal, domestic and industrial use is obtained from local springs and wells, fed by annual snow melt and sustained perennially by the groundwater flow system. We examined geochemical and isotopic tracers in samples from wells and springs on Mount Shasta, at the headwaters of the Sacramento River, in order to better understand the hydrologic system. The topographic relief in the study area imparts robust signatures of recharge elevation to both stable isotopes of the water molecule (δ18O and δD) and to dissolved noble gases, offering tools to identify recharge areas and delineate groundwater flow paths. Recharge elevations determined using stable isotopes and noble gas recharge temperatures are in close agreement and indicate that most snowmelt infiltrates at elevations between 2000 m and 2900 m, which coincides with areas of thin soils and barren land cover. Large springs in Mt Shasta City discharge at an elevation more than 1600 m lower. High elevation springs (>2000 m) yield very young water (<2 years) while lower elevation wells (1000–1500 m) produce water with a residence time ranging from 6 years to over 60 years, based on observed tritium activities. Upslope movement of the tree line in the identified recharge elevation range due to a warming climate is likely to decrease infiltration and recharge, which will decrease spring discharge and production at wells, albeit with a time lag dependent upon the length of groundwater flow paths. View Full-Text
Keywords: recharge; isotopes; noble gas; tritium; evapotranspiration recharge; isotopes; noble gas; tritium; evapotranspiration
►▼ Show Figures 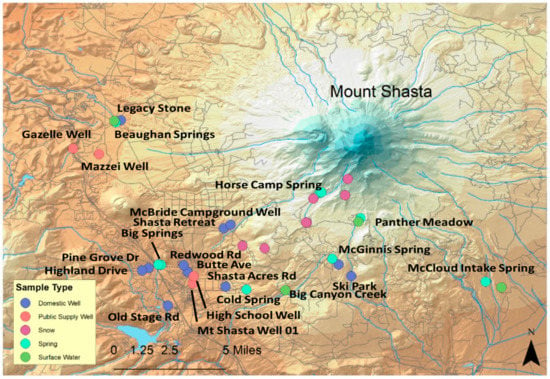