Syntrophic acetate oxidation operates close to the thermodynamic equilibrium and very little is known about the participating organisms and their metabolism. Clostridium ultunense is one of the most abundant syntrophic acetate-oxidising bacteria (SAOB) that are found in engineered biogas processes operating with high ammonia concentrations. It has been proven to oxidise acetate in cooperation with hydrogenotrophic methanogens. There is evidence that the Wood-Ljungdahl (WL) pathway plays an important role in acetate oxidation. In this study, we analysed the physiological and metabolic capacities of C. ultunense strain Esp and strain BST on genome scale and conducted a comparative study of all the known characterised SAOB, namely Syntrophaceticus schinkii, Thermacetogenium phaeum, Tepidanaerobacter acetatoxydans, and Pseudothermotoga lettingae. The results clearly indicated physiological robustness to be beneficial for anaerobic digestion environments and revealed unexpected metabolic diversity with respect to acetate oxidation and energy conservation systems. Unlike S. schinkii and Th. phaeum, C. ultunense clearly does not employ the oxidative WL pathway for acetate oxidation, as its genome (and that of P. lettingae) lack important key genes. In both of those species, a proton motive force is likely formed by chemical protons involving putative electron-bifurcating [Fe-Fe] hydrogenases rather than proton pumps. No genes encoding a respiratory Ech (energy-converting hydrogenase), as involved in energy conservation in Th. phaeum and S. schinkii, were identified in C. ultunense and P. lettingae. Moreover, two respiratory complexes sharing similarities to the proton-translocating ferredoxin:NAD+ oxidoreductase (Rnf) and the Na+ pumping NADH:quinone hydrogenase (NQR) were predicted. These might form a respiratory chain that is involved in the reduction of electron acceptors rather than protons. However, involvement of these complexes in acetate oxidation in C. ultunense and P. lettingae needs further study. This genome-based comparison provides a solid platform for future meta-proteomics and meta-transcriptomics studies and for metabolic engineering, control, and monitoring of SAOB. View Full-Text
Keywords: syntrophic acetate oxidation; hydrogen production; biogas process; energy conservation syntrophic acetate oxidation; hydrogen production; biogas process; energy conservation
►▼ Show Figures 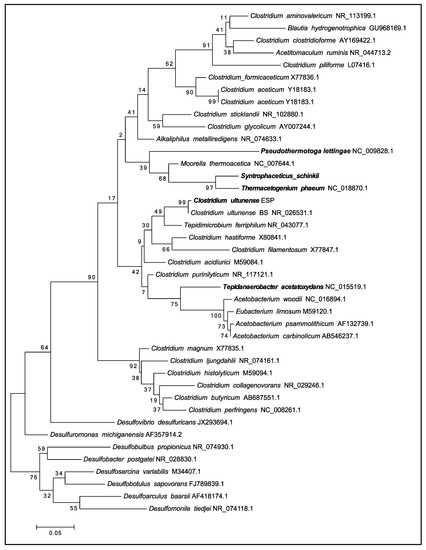