Chromosome Synapsis and Recombination in Male-Sterile and Female-Fertile Interspecies Hybrids of the Dwarf Hamsters (Phodopus, Cricetidae)
Next Article in Special Issue

Multiple myeloma (MM) is a haematologic malignancy characterized by the presence of atypical plasma cells. Basigin (BSG, CD147) controls lactate export through the monocarboxylic acid transporter 1 (MCT1, SLC16A1) and supports MM survival and proliferation. Additionally, BSG is implicated in response to treatment with immunomodulatory drugs (thalidomide and its derivatives). We investigated the role of single nucleotide polymorphisms (SNPs) in the gene coding for BSG and SLC16A1 in MM. Following an in silico analysis, eight SNPs (four in BSG and four in SLC16A1) predicted to have a functional effect were selected and analyzed in 135 MM patients and 135 healthy individuals. Alleles rs4919859 C, rs8637 G, and haplotype CG were associated with worse progression-free survival (p = 0.006, p = 0.017, p = 0.002, respectively), while rs7556664 A, rs7169 T and rs1049434 A (all in linkage disequilibrium (LD), r2 > 0.98) were associated with better overall survival (p = 0.021). Similar relationships were observed in thalidomide-treated patients. Moreover, rs4919859 C, rs8637 G, rs8259 A and the CG haplotype were more common in patients in stages II–III of the International Staging System (p < 0.05), while rs8259 A correlated with higher levels of β-2-microglobulin and creatinine (p < 0.05). Taken together, our results show that BSG and SLC16A1 variants affect survival, and may play an important role in MM. View Full-Text
Keywords: basigin; monocarboxylic acid transporter 1; single nucleotide polymorphisms; multiple myeloma; survival basigin; monocarboxylic acid transporter 1; single nucleotide polymorphisms; multiple myeloma; survival
►▼ Show Figures 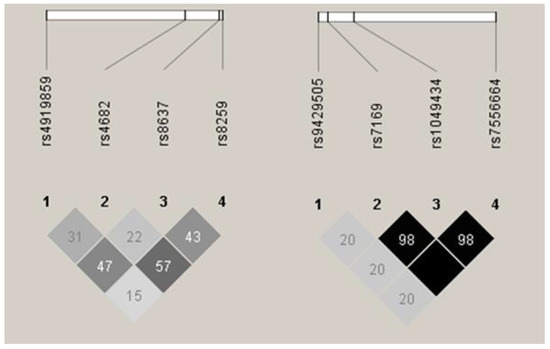