Back to the Salt Mines: Genome and Transcriptome Comparisons of the Halophilic Fungus Aspergillus salisburgensis and Its Halotolerant Relative Aspergillus sclerotialis

The Cabo Rojo solar salterns are a hypersaline environment located in a tropical climate, where conditions remain stable throughout the year. These conditions can favor the establishment of steady microbial communities. Little is known about the microbial composition that thrives in hypersaline environments in the tropics. The main goal of this study was to assess the microbial diversity present in the crystallizer ponds of Cabo Rojo, in terms of structure and metabolic processes across time using metagenomic techniques. Three samplings (December 2014, March and July 2016) were carried out, where water samples (50 L each) were filtered through a Millipore pressurized filtering system. DNA was subsequently extracted using physical–chemical methods and sequenced using paired end Illumina technologies. The sequencing effort produced three paired end libraries with a total of 111,816,040 reads, that were subsequently assembled into three metagenomes. Out of the phyla detected, the microbial diversity was dominated in all three samples by Euryarchaeota, followed by Bacteroidetes and Proteobacteria. However, sample MFF1 (for Muestreo Final Fraternidad) exhibited a higher diversity, with 12 prokaryotic phyla detected at 34% NaCl (w/v), when compared to samples MFF2 and MFF3, which only exhibited three phyla. Precipitation events might be one of the contributing factors to the change in the microbial community composition through time. Diversity at genus level revealed a more stable community structure, with an overwhelming dominance of the square archaeon Haloquadratum in the three metagenomes. Furthermore, functional annotation was carried out in order to detect genes related to metabolic processes, such as carbon, nitrogen, and sulfur cycles. The presence of gene sequences related to nitrogen fixation, ammonia oxidation, sulfate reduction, sulfur oxidation, and phosphate solubilization were detected. Through binning methods, four putative novel genomes were obtained, including a possible novel genus belonging to the Bacteroidetes and possible new species for the genera Natronomonas, Halomicrobium, and Haloquadratum. Using a metagenomic approach, a 3-year study has been performed in a Caribbean hypersaline environment. When compared to other salterns around the world, the Cabo Rojo salterns harbor a similar community composition, which is stable through time. Moreover, an analysis of gene composition highlights the importance of the microbial community in the biogeochemical cycles at hypersaline environments. View Full-Text
Keywords: metagenomics; hypersaline; halophilic archaea; Puerto Rico; Caribbean metagenomics; hypersaline; halophilic archaea; Puerto Rico; Caribbean
►▼ Show Figures 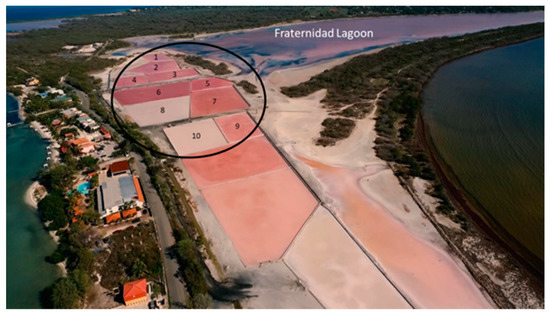