Centrioles and Ciliary Structures during Male Gametogenesis in Hexapoda: Discovery of New Models
Next Article in Special Issue

Revisiting the Interaction of γδ T-Cells and B-Cells

Right after the discovery of γδ T-cells in 1984, people started asking how γδ T-cells interact with other immune cells such as B-cells. Early reports showed that γδ T-cells are able to help B-cells to produce antibodies and to sustain the production of germinal centers. Interestingly, the presence of γδ T-cells seems to promote the generation of antibodies against “self” and less against challenging pathogens. More recently, these hypotheses were supported using γδ T-cell-deficient mouse strains, in different mouse models of systemic lupus erythematous, and after induction of epithelial cell damage. Together, these studies suggest that the link between γδ T-cells and the production of autoantibodies may be more relevant for the development of autoimmune diseases than generally acknowledged and thus targeting γδ T-cells could represent a new therapeutic strategy. In this review, we focus on what is known about the communication between γδ T-cells and B-cells, and we discuss the importance of this interaction in the context of autoimmunity. View Full-Text
Keywords: γδ T-cells; B-cells; γδ T–B-cell interaction; IL-4; autoantibodies γδ T-cells; B-cells; γδ T–B-cell interaction; IL-4; autoantibodies
►▼ Show Figures 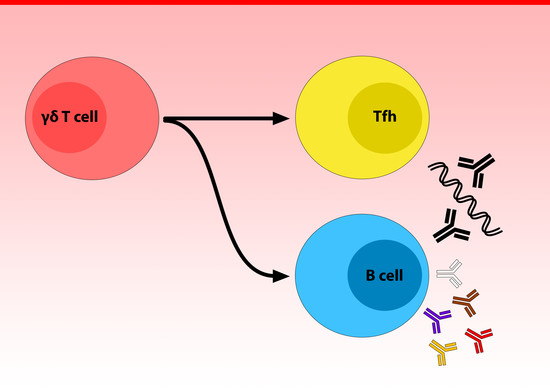