Purified myelin membranes (PMMs) are the starting material for biochemical studies, from individual components up to the isolation of detergent-resistant membrane (DRM) fractions or detergent-insoluble glycosphingolipid (DIG) fractions, which are commonly believed to resemble physiological lipid rafts. The normal DIG isolation protocol involves the extraction of lipids under moderate cooling. The isolation of PMMs also involves the cooling of myelin as well as exposure to low ionic strength (IS). Here, we addressed the combined influence of cooling and IS on the structure of PMMs. The phase behaviour was investigated by small angle X-ray diffraction. Analysis of the diffraction peaks revealed the lamellar periodicity (), the number of periodically correlated bilayers (), and the relatives fractions of each phase. Departure from physiological conditions induced a phase separation in myelin. The effect of monovalent and divalent ions was also compared at equivalent IS, showing a differential effect, and phase diagrams for both ion types were established—Ca2+ induced the well-known over-compacted phase, but additionally we also found an expanded phase at low IS. Na+ promoted phase separation, and also induced over-compaction at sufficiently high IS. Finally, exploring the whole phase diagram, we found evidence for the direct isothermal transformation from the expanded to the compacted phase, suggesting that both phases could in fact originate from the identical primary lateral phase separation, whereas the apparent difference lies in the inter-bilayer interaction that is modulated by the ionic milieu. View Full-Text
Keywords: detergent-insoluble glycosphingolipid; lipid–protein domains; domain phase segregation; membrane heterogeneity; small-angle X-ray diffraction detergent-insoluble glycosphingolipid; lipid–protein domains; domain phase segregation; membrane heterogeneity; small-angle X-ray diffraction
►▼ Show Figures 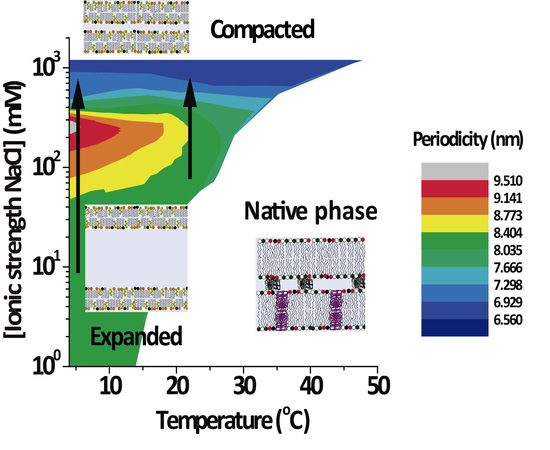