MapB Protein is the Essential Methionine Aminopeptidase in Mycobacterium tuberculosis

M. tuberculosis (Mtb), which causes tuberculosis disease, continues to be a major global health threat. Correct identification of valid drug targets is important for the development of novel therapeutics that would shorten the current 6–9 month treatment regimen and target resistant bacteria. Methionine aminopeptidases (MetAP), which remove the N-terminal methionine from newly synthesized proteins, are essential in all life forms (eukaryotes and prokaryotes). The MetAPs contribute to the cotranslational control of proteins as they determine their half life (N-terminal end rule) and facilitate further modifications such as acetylation and others. Mtb (and M. bovis) possess two MetAP isoforms, MetAP1a and MetAP1c, encoded by the mapA and mapB genes, respectively. Conflicting evidence was reported in the literature on which of the two variants is essential. To resolve this question, we performed a targeted genetic deletion of each of these two genes. We show that a deletion mutant of mapA is viable with only a weak growth defect. In contrast, we provide two lines of genetic evidence that mapB is indispensable. Furthermore, construction of double-deletion mutants as well as the introduction of point mutations into mapB resulting in proteins with partial activity showed partial, but not full, redundancy between mapB and mapA. We propose that it is MetAP1c (mapB) that is essentially required for mycobacteria and discuss potential reasons for its vitality. View Full-Text
Keywords: Methionine aminopeptidase; tuberculosis; mycobacteria; gene essentiality; ribosome Methionine aminopeptidase; tuberculosis; mycobacteria; gene essentiality; ribosome
►▼ Show Figures 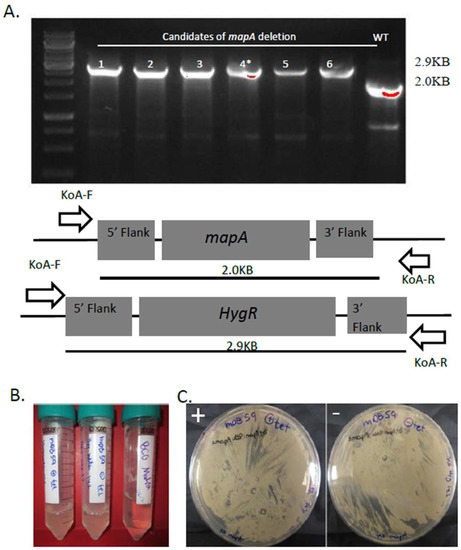