Differential Effects of Angiotensin-II Compared to Phenylephrine on Arterial Stiffness and Hemodynamics: A Placebo-Controlled Study in Healthy Humans
Previous Article in Journal

To investigate whether the beiging process changes the interactive effects of salt and MEK6 gene on inflammatory adipogenesis, the salt treatment (NaCl 50 mM) and MEK6 transfection of Tg(+/+) cells were performed with white adipocytes (WAT) and beige-like-adipocytes (BLA). BLA induced by T3 were confirmed by UCP-1 expression and the MEK6 protein was 3.5 times higher in MEK6 transfected WAT than the control. The adipogenic genes, PPAR-γ and C/EBP-α, were 1.5 times more highly expressed in the salt-treated groups than the non-salt-treated groups, and adipogenesis was greatly increased in Tg(+/+) WAT compared to non-transfected Tg(−/−). The adipogenesis induced by salt treatment and MEK6 transfection was significantly reduced in BLA. The inflammatory adipocytokines, TNF-α, IL-1β, and IL-6, were increased in the salt-treated Tg(+/+) WAT, but an anti-inflammation biomarker, the adiponectin/leptin ratio, was reduced in Tg(+/+), to tenth of that in Tg(−/−). However, the production of adipocytokines in WAT was strongly weakened in BLA, although a combination of salt and MEK6 transfection had the most significant effects on inflammation in both WAT and BLA. Oxygen consumption in mitochondria was maximized in salt-treated and MEK6 transfected WAT, but it was decreased by 50% in BLA. In conclusion, beiging controls the synergistic effects of salt and MEK6 on adipogenesis, inflammation, and energy expenditure. View Full-Text
Keywords: obesity; beiging; beige-like adipocyte (BLA); white adipocyte (WAT); MEK6; salt obesity; beiging; beige-like adipocyte (BLA); white adipocyte (WAT); MEK6; salt
►▼ Show Figures 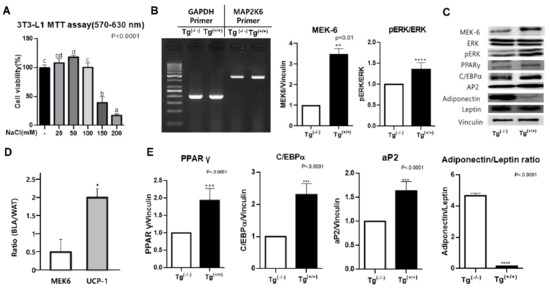