A sustainable management strategy of soil fertility and cropping system is critical to guaranteeing food security. However, little is known about the effects of soil amendment strategies on crop growth via regulating soil moisture and photosynthesis in a ridge and furrow cropping system. Here, field experiments were carried out in 2017 and 2018 in semi-arid areas of Loess Plateau, northwest China to investigate the effects of integrated use of ridge and furrow planting and manure amendment on grain yields of maize. Four treatments were designed: CK (flat planting with 100% chemical fertilizer), RFC (ridge and furrow planting with 100% chemical fertilizer), RFR (ridge and furrow planting with 100% control-released fertilizer), and RFM (ridge and furrow planting with 50% manure fertilizer + 50% N fertilizer). On average, RFM increased photosynthetic rates (Pn) by 74%, followed by RFR by 47%, and RFC by 26%, compared to CK. Also, stomatal conductance (Cd), transpiration rates (Tr), and intercellular CO2 concentration (Ci) were highest with RFM, followed by RFR and RFC. Averaged across the two years, RFM conserved 10% more soil water storage (SWS) than CK did at harvest, followed by RFR with an increment by 8%. However, RFC consumed more soil water than CK did, with its ETc 8% higher than CK. Consequently, spring maize treated with RFM suffered less drought stress, especially in 2017 when precipitation was insufficient. On average, grain yields and water use efficiency of RFM were increased by 18% and 27%, compared to CK. Structural equation modeling analysis showed that there existed significant positive correlation between SWS in top layers and grain yields, while SWS in deep layers had negative effects on grain yields. In conclusion, the incorporation of manure into ridge and furrow planting system can be an efficient agronomic practice to improve plant photosynthesis, optimize soil moisture, and boost grain yields in semi-arid areas of Loess Plateau, northwest China. View Full-Text
Keywords: structural equation model; organic fertilizer; dry matter; rain-fed agriculture; Zea mays L. structural equation model; organic fertilizer; dry matter; rain-fed agriculture; Zea mays L.
►▼ Show Figures 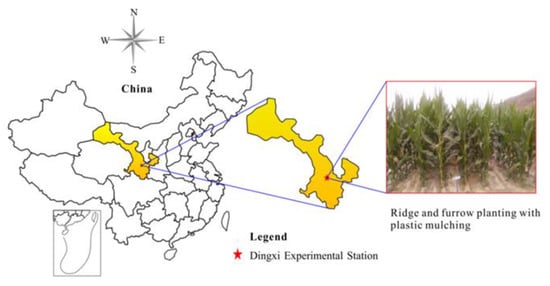