Several narrow or broadband spectral indices can be calculated at varying spatial and spectral resolution, which can then be correlated with the physiological and nutritional status of the leaves. In a three-year trial carried out on fruiting, potted cv. Barbera grapevines subjected to full (N+) or no (N0) nitrogen supply, seasonal evolution of different leaf spectral indices were correlated with non-destructive chlorophyll readings (Minolta SPAD meter), leaf gas exchange, and vine performance. Throughout the entire trial, N starvation resulted in greater-than-proportional limitation of vine yield as compared to vegetative growth (55% compared to 26% less than values measured on N+). Indices calculated within the red-edge spectral domain had highest sensitivity to relative change between N+ and N0, also indicating that the promptest response was recorded at the median shoot zone level. Twelve broadband indices were linearly correlated with leaf blade N concentration at veraison, indicating that N values ≤ 1.8% of dry matter identify a limiting N status. Any of these indices collected at the leaf level can be reliably used as a non-destructive predictor of N availability, albeit due to significant between-year variation in their absolute values at a given N level, readings should always include a well-supplied N treatment. View Full-Text
Keywords: mineral nutrition; visual symptoms; leaf age; assimilation; yield components; phenotyping; red-edge mineral nutrition; visual symptoms; leaf age; assimilation; yield components; phenotyping; red-edge
►▼ Show Figures 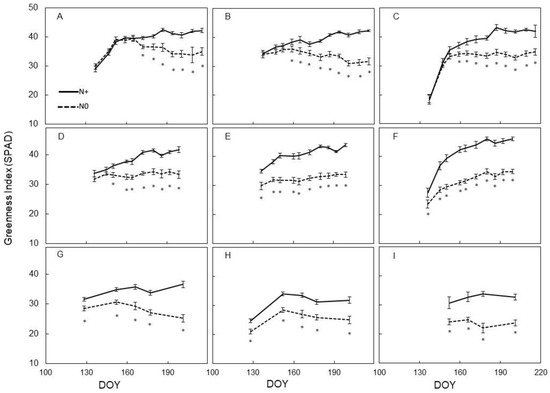