This paper describes both the synthesis and characterization of a biobased and non-aromatic polyacetal produced from the reaction between isosorbide and methylene chloride. The reaction was conducted in an aprotic dipolar and harmless solvent using a one-step, fast and economical procedure. The chemical composition of this polymer was investigated using Nuclear Magnetic Resonance and Fourier Transform Infra-Red spectroscopies. The molecular weights were examined by size exclusion chromatography and MALDI-TOF spectrometry. The synthesis conditions (concentration, mixing speed, solvent nature, stoichiometry, addition mode of one reactan) were found to strongly influence both polymer architecture and reaction yield. Under moderated stirring conditions, the polyacetal was characterized by a larger amount of macro-cycles. Inversely, under higher intensity mixing and with an excess of methylene chloride, it was mainly composed of linear chains. In this latter case, the polymeric material presented an amorphous morphology with a glass transition temperature (Tg) close to 55 °C. Its degradation temperature was evaluated to be close to 215 °C using thermogravimetry according to multi-ramp methodology. The chemical approach and the physicochemical properties are valuable in comparison with that characteristic of other isosorbide-based polyacetals. View Full-Text
Keywords: isosorbide; biosourced polymer; polyacetal; synthesis optimization; physicochemical properties; spectroscopies; cyclic/linear architectures isosorbide; biosourced polymer; polyacetal; synthesis optimization; physicochemical properties; spectroscopies; cyclic/linear architectures
►▼ Show Figures 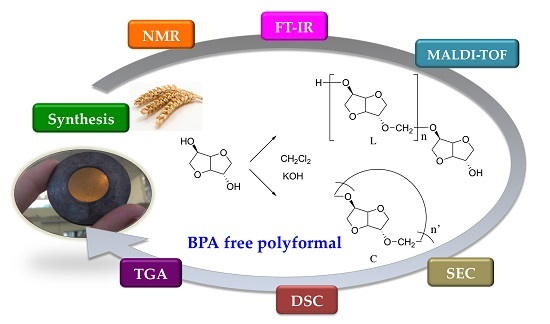