A simple, efficient and reliable analytical method was developed and used for the determination of the fluvoxamine drug (FLV) in pharmaceutical preparations and biological fluids. The method is based on the cost-effective screen-printed platform for the potential transduction of the drug. Host-tailored molecular imprinting polymer (MIP) was integrated with the potentiometric platform as a recognition receptor, in which FLV, acrylamide (AAm), ethylene glycol dimethacrylate (EGDMA) and acetonitrile were used as a template, functional monomer, cross-linker, and solvent, respectively. MIP particles were dispersed in plasticized poly (vinyl chloride) (PVC) and the membrane was drop-casted on carbon screen-printed electrode. The MIP, in addition to non-imprinted polymers (NIP), was characterized and the binding experiment revealed high affinity and adsorption capacity of MIP towards FLV. The proposed sensor displayed near-Nernstian cationic slope of 55.0 ± 0.8 mV/decade (r2 = 0.999) with a low detection limit of 4.8 × 10−6 mol/L over a wide pH range (3.0–8.5). The electrochemical features of the proposed sensors including electrochemical impedance spectroscopy (EIS) and chronopotentiometry measurements (CP) in the presence of multi-walled carbon nanotubes (MWCNTs) as a solid contact transducer were also investigated. The applications of the proposed sensor for the determination of FLV in different dosage forms with recovery values (98.8%–101.9%) and (97.4%–101.1%), respectively compared with the reference HPLC method with acceptedFandt-student tests values at the 95% confidence level. View Full-Text
Keywords: molecular imprinting polymers (MIP); screen-printed; solid contact; ion-selective electrodes (ISEs); fluvoxamine; MWCNTs molecular imprinting polymers (MIP); screen-printed; solid contact; ion-selective electrodes (ISEs); fluvoxamine; MWCNTs
►▼ Show Figures 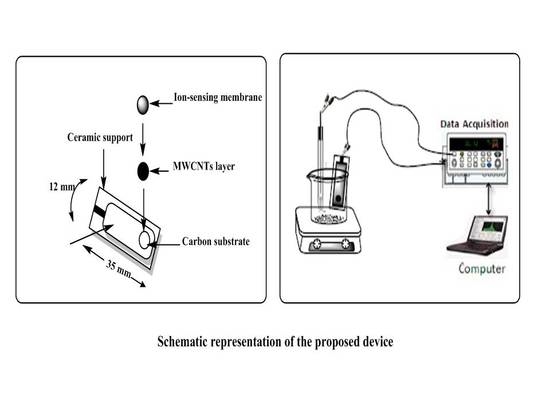