Vegetable Tannin as a Sustainable UV Stabilizer for Polyurethane Foams

Capsular devices for oral drug delivery were recently proposed and manufactured by injection molding (IM) as an evolution of traditional reservoir systems comprising a core and a functional coating. IM allowed the fabrication of capsule shells with release-controlling features based on the employed materials and the design characteristics. These features are independent of the drug, with significant savings in development time and costs. In previous work, IM was used to produce enteric-soluble capsules from blends of hydroxypropyl methylcellulose acetate succinate, with polyethylene glycol (PEG) as the plasticizer. In this work, the range of plasticizer concentrations and molar mass was broadened to evaluate in-depth how those parameters affect material processability and capsule performance over time. As expected, increasing the amount of the low molar mass plasticizer decreased the viscosity and modulus of the material. This simplified the molding process and enhanced the mechanical resistance of the shell, as observed during assembly. However, some samples turned out translucent, depending on several factors including storage conditions. This was attributed to plasticizer migration issues. Such results indicate that higher molar mass PEGs, while not significantly impacting on processability, lead to capsular devices with consistent performance in the investigated time lapse. View Full-Text
Keywords: HPMCAS; PEG; plasticization; injection molding; drug delivery; gastric resistance; capsular device HPMCAS; PEG; plasticization; injection molding; drug delivery; gastric resistance; capsular device
►▼ Show Figures 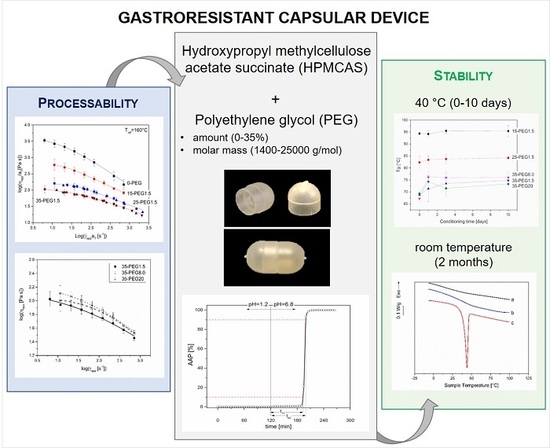