Melt convection during the directional solidification process of multi-crystalline silicon plays a critical role in the transport of impurities. The utilization of a static magnetic field is an effective way to control the melt convection pattern. Studying the effect of the Lorentz force induced by the vertical magnetic field (VMF) on the melt convection of silicon in detail is beneficial to optimize the magnetic field parameters in the production process. Based on the numerical simulation method of multi-physics coupling, this paper explores the effects of different VMF intensities on the convection of silicon melt and the transport of oxygen in the melt during the directional solidification of polycrystalline silicon. The results show that in the first 125 minutes of the crystallization stage, the melt convection velocity is affected significantly by the magnetic field intensities. When different convection circulations are present in the silicon melt, the upper circulation easily transports oxygen to the furnace atmosphere, and the subjacent circulation easily lead to the retention and accumulation of oxygen. Enhancing the VMF intensity to a certain extent can reduce the size of the oxygen retention region in the silicon melt, and the time of the first disappearance of the subjacent circulation near the sidewall of the crucible is shortened. Then the average oxygen concentration in the silicon melt can be reduced. However, a larger vertical magnetic field intensity can result in greater average oxygen concentration in the oxygen retention region. View Full-Text
Keywords: directional solidification; multi-crystalline silicon; melt convection; oxygen impurity; numerical simulation directional solidification; multi-crystalline silicon; melt convection; oxygen impurity; numerical simulation
►▼ Show Figures 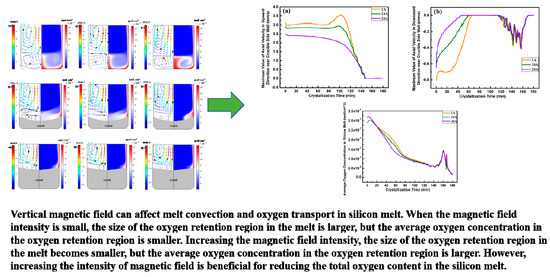