We analyzed the oncologic outcomes and toxicities after intensity-modulated radiation therapy (IMRT) or pencil beam scanning proton therapy (PBSPT) in patients with locally advanced non-small cell lung cancer treated with concurrent chemoradiation therapy. Due to an imbalance in baseline characteristics between IMRT and PBSPT, we used propensity score-based statistical analysis. Regarding radiation therapy planning, PBSPT exhibited superior sparing of the lung, heart, and spinal cord compared to intensity-modulated (photon) radiotherapy in patients with advanced NSCLC. However, PBSPT resulted in higher incidence of grade 3 or more dermatitis and esophagitis compared to IMRT. Despite declined baseline lung function, PBSPT demonstrated a comparable rate of symptomatic radiation pneumonitis compared to IMRT. PBSPT could be an effective and safe treatment technique with comparable locoregional control. 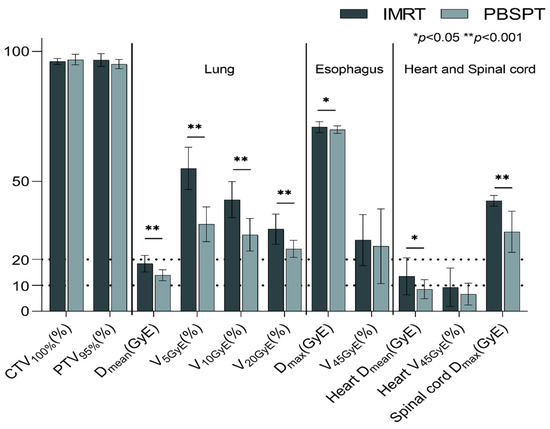